Academics from the University of Oxford, in collaboration with the Open University and King's College London, are challenging perceptions of India immigration and helping those of British-Indian descent understand and celebrate their heritage.

There has been a strong Indian presence in Britain for more than 150 years. Oxford academics have worked on tracking early Indian travellers to Britain, Oxford and London in particular, and have discovered that British and Indian cultures have been interwoven for centuries.

Professor Elleke Boehmer, novelist and academic based in the Faculty of English, working together with AHRC research fellow Dr Sumita Mukherjee, has been sharing her discoveries with the local, national and international community. They first ran an exhibition with the Bodleian Library, which displayed ancient Sanskrit, saris, letters and poetry from Indian travellers to Oxford, demonstrating the longstanding Indian presence in Britain, before moving their efforts to East Oxford where there is a strong South Asian community. 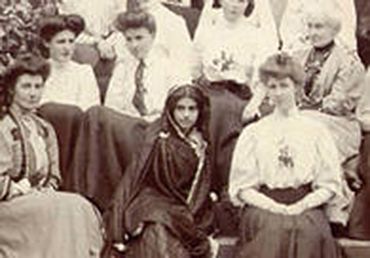 Professor Boehmer then helped to create an installation that tells the stories of how different Indian people, in collaboration with the OXASIANS, have connected with Oxford over the past century. The stories include those of figures like Indira Gandhi, who studied at Oxford and went on to be Prime Minister of India from 1966 to 1977 and for a further term from 1980 until her assassination in 1984.

In collaboration with the British Library, a travelling exhibition mounted by the AHRC-funded ‘South Asians Making Britain’ team that profiles Indian influences on British culture will soon be touring Britain and India. The exhibition will travel to universities, museums and libraries and also to smaller towns with a strong Indian community. Showing how Indian culture has positively influenced British food, clothes, politics and war for hundreds of years may go some way to combating racism and inspiring those of Indian origin take pride in their heritage.

Funded by the Arts and Humanities Research Council and the University of Oxford John Fell Research Fund.

‘This project will help to change the common perception that Britain had a single cultural identity until the 1940s and should encourage a better public understanding of the diverse influences that have shaped British culture and identity over several centuries.’