Mounted police are part of our collective consciousness. The Royal Canadian Mounted Police, New York’s ‘10 foot tall cops’ (as the city’s mounted units were once called by a police commissioner) and Britain’s ceremonial units are known the world over. They are imbued with prestige and mystique, and no little fear: witness their role in London’s poll tax riots in March 1990, or at any number of British football matches. But if the symbolic resonance of mounted units has always been clear, their effectiveness and real value has been undocumented. Pioneering research by the University of Oxford’s Centre for Criminology is set to change this. 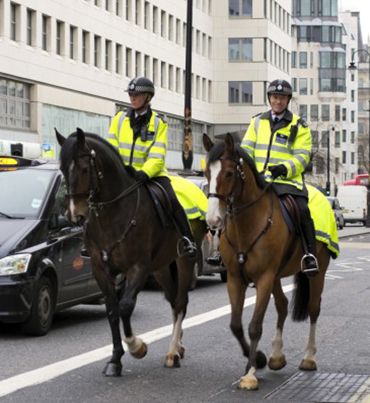 Mounted police in the United Kingdom.

Conceived in late 2012, the mounted policing project Making and Breaking Barriers was set up by Ben Bradford and Chris Giacomantonio, of the Centre for Criminology, with the aim of determining whether or not mounted police could be said to have value for UK public policing – a pressing question in an era of austerity. The project was originally intended to last just four months, but its success, which has seen a remarkable degree of cooperation among researchers and the police, soon led to its expansion.

The current phase of the project is funded by an ESRC ‘Knowledge Exchange’ grant, in conjunction with Gloucestershire Police. One piece of research took place between February and April 2014 when Gloucestershire Police, in conjunction with the Oxford’s Centre for Criminology, RAND Europe and the Metropolitan Police Service, conducted a ‘quasi-experiment’ into the effect of mounted police community patrols on public trust and confidence.

“Six areas were selected, four in Gloucestershire and two in South London,” says Bradford. “After an initial period of surveying in each of the areas in February 2014, mounted community patrols took place in three of them in March. A second round of surveying took place in April. Early results reveal a measurable value and impact of mounted police in neighbourhood settings. People who have recently seen mounted patrols tend to have higher levels of trust and confidence in police.”

Observations of mounted units continued at football matches and at an English Defence League demonstration. This research was aided considerably by the use of mobile technology for tracking police activities on deployments, with Dr Giacomantonio, formerly a DPhil student at the Centre of Criminology and now at RAND Europe, developing two app-based solutions to generate real-time data in his role as project manager. By way of testimony to the usefulness of these apps, their further development is supported both by the College of Policing and the Police Federation with a view to use not just by mounted units but among officers in general.

Focussing on the extent to which mounted units have a tangible, positive value in community policing, their usefulness in public order settings, and the relative costs involved, Making and Breaking Barriers will not only shed light on this hitherto under-studied aspect of policing, but will also, in the process, helps us understand what policing means in the early 21st century.

Funded by an ESRC ‘Knowledge Exchange’ grant, in conjunction with Gloucestershire Constabulary and Avon and Somerset Constabulary.

‘It does not feel right to lose such a historic and versatile capability due to short term financial challenges without fully understanding how sadly it would be missed. That doesn’t mean to say there aren’t more cost effective ways of delivering mounted policing, and this academic research will help sign post those alternatives. It will also equip, for the first time, strategic decision makers with an evidence base. I feel very fortunate to have Dr’s Bradford and Giacomantonio bringing their academic expertise to bear and on such a relevant topic.’