Researchers in the Faculty of History are working to establish the ‘Jewish country house’ as a focus for research and an important site of British and European culture and memory. 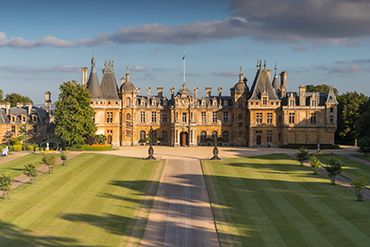 When we think about Jewish history and heritage in Europe we tend to think about urban spaces: urban ghettos, city synagogues and the metropolitan homes of the Jewish bourgeoisie. By contrast, the role – and even existence - of Jewish country houses in Britain and continental Europe tends to be overlooked.

“But in the 19th century emancipation gave Jews crucial civil and political rights they had previously been denied, including the right to own land,” explains Professor Abigail Green. “As part of this process, Jewish families began buying, building, or restoring country houses – creating a network of sites of significant cultural and historical importance across Europe.”

“Waddesdon manor in Buckinghamshire, for example, was built between 1874 and 1885 by Ferdinand de Rothschild, a scion of the famous the Jewish banking family, who gathered an impressive art collection to the house. Or, to take another example, the writer Leonard Woolf bought a small cottage called Monks House in 1919, as a rural retreat for himself and his wife Virginia. Woolf was in fact an atheist, but that does not mean that his Jewishness was an unimportant aspect of his life.”

Until recently, the Jewish stories attached to often rather well-known country houses have been little studied or understood, and rarely reflected in the interpretation of these properties. The Jewish Country Houses Project, led by Green and colleagues at the Universities of Cardiff and Durham in dialogue with curators and heritage organisations, is attempting to address this deficit and recognise the place of these properties in European culture and heritage.

“Country houses are usually associated with the English aristocracy and tell a particular kind of story, but our research challenges these perceptions,” comments Green. “Crucially, it underlines both the Englishness and the cosmopolitanism of many Jewish country house owners, who were often patrons of the arts and involved in pan-European – and even global – social and political networks.”

The Jewish Country Houses project has led to new approaches to curation and interpretation and enhanced visitor experience.

Green and her team have worked with the National Trust (NT) to identify the Jewish connections of several NT properties (notably Hughenden, Waddesdon, Upton, Monk’s House, Mottisfont Abbey and Nymans), and with smaller charities like Strawberry Hill House. Beginning with a major conference attended by over 30 heritage practitioners in 2018, the Jewish Country Houses project has provided ongoing support to NT staff and volunteers, enabling them to explore the histories of their respective properties and plan events as part of the B’nei B’rith UK Days of Jewish Heritage.

In 2018 the ‘Disraeli the Other’ exhibition at Hughenden explored Disraeli’s Jewish background and how this was reflected in his life and home: his Jewishness has now become a fixed element in the museum’s interpretation. In 2019 Upton House developed the ‘Upton in a Suitcase’ activity as part of their Kindertransport display, with a view to informing their ongoing work with local schools.

Feedback from curators and managers indicates the importance of this engagement in giving them the tools and confidence to plan events and develop new approaches.

Resource packs developed by Green and her colleagues to support heritage professionals, and further training for staff and volunteers, are continuing to transform curatorial practice and visitor experience. Last year, for example Green worked with the Holocaust Educational Trust and JTrails to create a programme for teachers to support Holocaust education in schools through a focus on the Holocaust connections and histories of Waddesdon Manor and Nymans.

This new research has also informed the ‘National Heritage List’ for England maintained by Historic England, enabling the organisation to reference the association of prominent Jewish families with designated buildings, parks, and gardens. Historic England’s List Amendment Project also provides an opportunity for members of the public to enrich the List with their own images and information.

Another major achievement has been the launch of a pan-European network of Jewish country houses, bringing together 16 properties from six different countries. A website developed by the European Association for the Preservation and Promotion of Jewish Culture and Heritage (AEPJ) now hosts a ‘Palaces, Villas and Country Houses’ route, based on Green’s research, introducing the houses and their Jewish connections to many thousands of online and in-person visitors.

“Feedback from our research really shows the extent to which our work has impacted curatorial understanding and visitor experience at these houses,” says Green.

“For me, the opportunity to foreground marginalised narratives has been particularly important. Highlighting lesser-known aspects of Jewish history and engaging sensitively with the cosmopolitanism of these families and the ways in which their lives were shaped both by Jewishness and by antisemitism, illuminates the Jewish dimensions of our history and heritage – and can, I hope, contribute to building tolerance and understanding for all communities.”

“[The] seminar has opened my eyes to a host of possible stories and connections which may lie just under the surface… [a key insight was that how] we talk about Jewish History is important within today’s society.”

“[The] inspirational training has given our guides and house hosts the confidence they lacked to engage with the subject and its broader historical contexts.” Curator,

“[The training was] particularly successful and useful to us [by enabling staff and volunteers] to feel more confident in talking to visitors about Disraeli’s Jewish history.”

“[The Jewish Country Houses project served to] provoke people to think differently about history, identity, and the world today. These properties would not have thought of marketing themselves in this way, or considering their museums in this broader context, without the initial impetus from Green’s research project.”