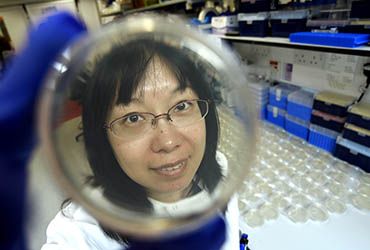 A research student in a Medical Sciences laboratory.
The Structural Genomics Consortium (SGC) at the University of Oxford is developing new molecules and reagents to accelerate the discovery of medicines. The primary focus is on addressing novel therapeutic opportunities within less well studied areas of the human genome, in particular genes that have been associated with cancer, neuropsychiatry, metabolic conditions and inflammation. The SGC is built upon a pre-competitive open science approach that enables it to work in close collaboration with nine large pharmaceutical companies, several disease foundations and patient groups.

The cost and time to deliver a new medicine is now estimated to be over $2BN and 15 years, respectively, with less than 5% of drugs entering clinical trials reaching the market. The cost of these failures is huge and reducing the number of these failures has never been more important to deliver safe and affordable medicines, with the majority of conditions still having no effective therapy available. The SGC’s collaboration with pharmaceutical companies is a unique multi-institution platform for generating crucial early data and discussions to fast-track decisions around whether new discoveries are worthy of further investment and development.

There are now vast quantities of genomic information being routinely generated, but the knowhow and reagents needed to explore at the molecular level the consequences of mutation and associated knowledge to design a drug therapy are still lacking. Since 2015 the SGC’s approach has been to provide toolkits called Target Enabling Packages (TEPs) to do just this, offering the missing link between genomics and chemical biology. Some thirty of these high quality tool kits have been generated in the last four years and used internationally by researchers to catalyse their work into diverse diseases such as Fragile X syndrome, Crohn’s disease and Ewings sarcoma, and even for the development of new antibiotics. The SGC’s TEPs are leading to identification of new biology, disease understanding and ultimately innovative starting points for drug discovery.

The SGC’s work with patient groups is performed in the open with experiments being written up in real-time in web based open lab notebooks. Data and reagents are immediately publically available without restriction on use, helping to reduce the level of duplication of effort within the scientific community and wastage of resource and time.

The SGC is a global organisation, and includes sites at the Universities of Oxford and Toronto, the Karolinska Institute (Stockholm), Goethe University of Frankfurt and the University of North Carolina. With the leadership of Professor Chas Bountra OBE, the Oxford team have developed deep collaborations with Abbvie, Bayer, Boehringer Ingelheim, Janssen, Merck KGaA, MSD, Novartis, Pfizer and Takeda. Disease foundations and patients groups working with the SGC include the Genetic Alliance, Alzheimer’s Research UK, CHDI Foundation, FOP action, Myeloma UK, The Brain Tumour Charity and the Canadian FORGE initiative.

The SGC has built a unique ecosystem for collaborative research in the last 16 years producing more than 4000 publications, accelerating over 100 proprietary programmes and enabling 40 clinical projects. As such the SGC are leading innovation in early stage drug discovery to deliver projects capable of transformational changes to society.

“Working with our team within the SGC, who are focused on the very rare genetic condition, Fibrodysplasia Ossificans Progressiva (FOP) has been fantastic.  I personally and we, as the charity FOP Friends, have been involved with the team for almost 10 years.  The impact they have made to research into FOP and the hope they have given to our community by being involved in that effort is extraordinary.  The team are always accessible and willing to help and communicate with us, they even put themselves in-front of the camera to support our cause and always support our events, including presenting and running workshops, not only on FOP but on basic science, genetics and research so our doctors, families, and patients can understand more.  I would not change our team for the world… well maybe just to make it bigger!”

“We are really proud to have been one of the first UK charities to partner with the SGC. We admire their open science philosophy as it accelerates progress by focussing more minds on our challenging research area, and decreasing duplication. Importantly for our community, it also aligns with our research strategy “A Cure Can’t Wait””.