An Oxford University researcher has developed a telephone-based system to help clinicians diagnose and treat patients with diseases that affect their voice. 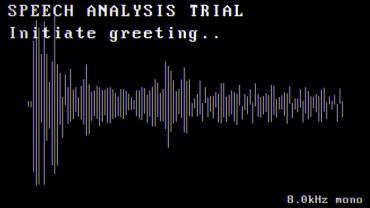 Speech analysis
Diseases affecting the voice are not only debilitating but have historically entailed cost and inconvenience. As well as being worried by their conditions, patients have to travel to see a specialist, while the NHS has to allocate resources in the absence of clear data. Pioneering work by Dr Ladan Baghai-Ravary, a phonetics expert and Knowledge Exchange Fellow in The Oxford Research Centre for the Humanities (TORCH), is set to change things for the good of both patients and hospitals alike.

Dr Baghai-Ravary has developed software which can analyse a brief phone questionnaire, searching for the characteristic signs of a range of conditions which can be caused by anything from Parkinson’s disease and strokes to disorders such as spasmodic dysphonia, which can severely impair the ability of sufferers to communicate, and so create social isolation.

These disorders change the sound of patients’ speech in different ways. Dr Baghai-Ravary’s software looks at the tone, pitch and dynamics of speech, as well as the ways that different sounds are produced, and tests cognitive function using memory and reasoning tests.

The procedure is easy to use, given that the vast majority of people use phones on a daily basis. In trials, volunteers have been asked to perform a series of tasks, such as saying ‘ahhh’ for as long as they could and reciting sample sentences. They have also completed a basic memory test. Recordings of their speech were then compared with statistical models of normal speech to identify any abnormalities.

“We found that different features can indicate different disorders,” says Dr Baghai-Ravary. “and additional tests can be used to evaluate different aspects of reasoning ability.”

The impact of the new procedures – developed via a partnership with Aculab Cloud and OperaVox – will be far-reaching. People have a tendency to put off going to the doctor even if they have early signs of these illnesses. Soon they will be able simply to call a phone number and quickly receive feedback to encourage them to make an appointment for a clinical diagnosis. With obvious cost and time savings for patients and the NHS, it is anticipated that Dr Baghai-Ravary’s work will be deployed in a clinical setting within two years.

‘Aculab Cloud is keen to expand its presence in the medical and telehealth fields, and Dr Baghai-Ravary’s work has proved an ideal opportunity for us to make a meaningful contribution to the welfare of patients and the efficiency of the NHS in the UK. We strongly support her work, and are confident that it will provide significant advances in the treatment and diagnosis of voice disorders in the near future.’