An Oxford academic helps mould the young leaders who will make a difference in the world’s economic powerhouse. 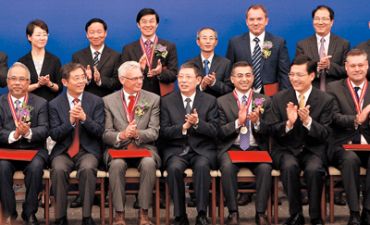 Alan Hudson receiving the ‘The Golden Magnolia’ award in 2013.
It took just 35 years, from the adoption of a market-based economy in 1978, for China to become a world economic powerhouse – and its embrace of a Western-style welfare system has been similarly impressive. But although China was quick to establish a welfare system, problems remain. Provision is inadequate and inconsistent, more a patchwork of societal and geographic fragments than a coherent whole.

Alan Hudson of the Department for Continuing Education is among those at the University of Oxford who are seeking to address this, thanks to public policy and leadership programmes for future leaders, influencers and decision-makers in China.

In collaboration with Chevening, the UK government's international awards scheme aimed at developing global leaders, Hudson helps ensure that officials from the Chinese Health Ministry spend up to six months in Oxford, studying aspects of social policy and health-related issues. The programme has been running since 2012.

“Up to three academic visitors come to Oxford for six months each year,” explains Hudson. “They’re funded by Chevening and can work on specific research projects in the subject areas of healthcare, health policy and health reform, interacting with academics, students and other experts from outside the University.”

The most recent delegate was the Chinese official responsible for designing and implementing an analysis of China's provision for the treatment of the blind, on a province by province basis.

This kind of work, says Hudson, has a tangible impact on everyday lives in China. “It’s widely recognised that social provision in China is inadequate, and that enhancing it contributes to domestic stability and a thriving economy. Our courses give visiting Chinese leaders of the future the tools to improve a number of aspects of the welfare system, from caring for the elderly to treating diseases and dealing with public disasters.”

Hudson has more than a decade of experience of working in China. In 2013, he was honoured in Shanghai with ‘The Golden Magnolia’ award – no more than ten of which are given annually by the Shanghai government to foreigners – for his services to the city. He is looking forward to the arrival of the next Chinese delegates on the Department for Continuing Education’s course, and to visits by the Hong Kong Jockey Club:

“The Jockey Club is a famous institution in Hong Kong that, as well as being a horse racing operator, is also the territory’s largest public benefactor. We host candidates on an intensive seven-day programmes in which they look at the nature and requisite skills for leadership in the 21st century.”

Programmes like this, and the Department’s ongoing public policy and leadership work, will help equip China in its quest to bring about comprehensive social care and provision.

“Studying at Oxford University through the Department for Continuing Education has hugely helped my career as a health policy maker in the Chinese National Health and Family Planning Commission. As a visiting researcher studying health policy and reform, looking in particular at the NHS in Britain, I learned a tremendous amount thanks to Alan Hudson – practical, real skills that I am sure will be of great benefit to my work in China”