The University of Oxford is at the forefront of a pioneering project to improve outcomes for at-risk patients in NHS hospitals. 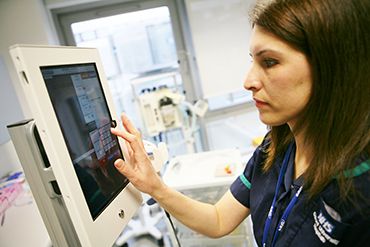 SEND (System for Electronic Notification and Documentation).
It is not always easy for hospital staff on non-acute wards to identify patients who are at risk of rapid deterioration. Around 23,000 people a year in the UK suffer unexpected in-hospital cardiac arrests, for which mortality rates are high. It is known that patients experiencing such adverse events show abnormal physiology in the preceding hours, and that intervening early can lead to much better health outcomes.

The key issue is how to detect this deterioration. On non-acute wards, staff typically record a patient’s vital signs (such as blood pressure and heart rate) at four-hourly intervals and manually calculate an ‘Early Warning Score’. When the score exceeds a given threshold, a response is triggered. Until recently, however, ‘trigger scores’ were based on an individual clinician’s judgement rather than on standardised evidence-based measures.

Professor Lionel Tarassenko in the Department of Engineering Science believed that a system based on real data from patients could lead to better outcomes. Supported by the NIHR Oxford Biomedical Research Centre and Intensive Care consultant Dr Peter Watkinson, Professor Tarassenko and his research team investigated the statistical properties of the main vital signs using over 64,000 hours’ worth of data gathered from 863 patients. This led to the design of a new paper-based ‘track and trigger’ system that could alert clinicians more accurately to patients at risk of sudden deterioration. The system was introduced into acute Oxfordshire hospitals in 2011 – the first time that ‘early warning’ systems had been standardised across all four hospitals. There was an impressive 10% reduction in cardiac arrest rates in the following year.

Recognising the limitations of paper-based systems, the researchers then developed a straightforward electronic system that would lead to greater accuracy, a faster response time and better standardisation. The technology, known as SEND (System for Electronic Notification and Documentation), allows staff to input a patient's vital signs into a web-based application on a tablet computer at the bedside. The tablet calculates a risk score for the patient and displays any deterioration in their condition so that staff can intervene quickly.

SEND was rolled out across Oxfordshire’s acute hospitals between January 2014 and September 2016. In that time, it collected more than 12 million vital-sign observations. On many wards, patients are now prioritised during the ward round according to their latest risk score. As well as improving individual patient care, the system allows information about patients to be shared between the hospitals.

The system has been received enthusiastically by hospital staff, and the intention is to make it available to the wider NHS – helping other hospitals to tackle problems such as prolonged stays and poor long-term health outcomes.

‘By investing in digital technology to monitor patients’ vital signs we will see improvements in patient safety and better results for patients. This project is an example of the great work the National Institute for Health Research is doing to support trials of new innovations in places such as Oxford so that they can be rolled out across the NHS.’