Oxford scientists have developed a computer model showing how different amounts of surface water can effect changes in regional climate. 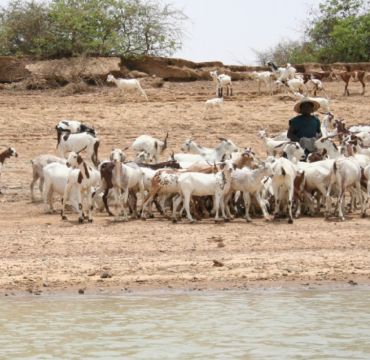 A goat farmer in Niger.

We all know that climate affects land use, that rainfall impacts on river and reservoir management, but to what extent is the reverse true? How do lakes, rivers and flooding affect climate?

A good place to find out is in those countries where flooding is widespread and weather patterns are extreme. Several countries in West and East Africa fit the bill. Dr Simon Dadson and a team of scientists are therefore researching the wetlands of Africa, starting with the landmass around the river Niger. A further reason for researching the wetlands is that they generate methane, the second largest source of greenhouse gas.

Around the Niger the wetlands are inundated with water in the annual monsoons. Working with colleagues at the NERC (National Environment Research Council) Centre for Ecology and Hydrology, and the Meteorological Office, Dadson and his team researched what happens during and after a monsoon. They created a climate model charting river flows, rainfall, storms and flooding, based on recent and historical data from river gauging and satellite observations. The most innovative element in the model was its ability to simulate flooding in regions where there is little data on monsoons. The research confirmed two trends: a) the Niger’s water level is high until it reaches the wetlands, after which it flatlines for a considerable length of the river; b) the larger the area of flooding the more frequent are the storms after a monsoon. Moreover, as the satellite data showed those storms don’t just affect the Niger region but areas well beyond it.

This research has far-reaching implications for water management because it means that changes in land use, such as the creation of canals or dams can affect rainfall and regional climate. By simulating various scenarios it can be used by water authorities around the world to assess water availability in specific circumstances. The work has already been used by scientists in South Africa modelling interactions between climate, hydrology and vegetation.

‘Dr Dadson has enabled us to expand the set of tools with which to explore the interactions between climate, hydrology and vegetation in the region. This collaboration has been immensely helpful to me and the African environmental sciences community.’