Thanks to work carried out by researchers at the University of Oxford, patients with a particular genetic form of diabetes can now be treated with an oral tablet rather than an insulin injection, which dramatically improves their blood glucose control and quality of life. 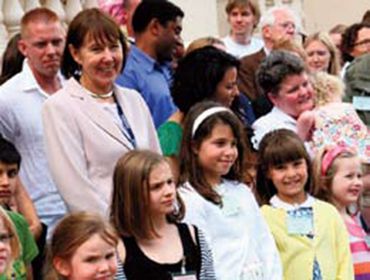 Professor Frances Ashcroft with neonatal diabetes patients and their families.

These patients have neonatal diabetes, a rare type of diabetes that usually develops within six months of birth. It results from a genetic defect in a protein known as a potassium channel, which is crucially important for ensuring that insulin is secreted when blood sugar levels rise. Professor Frances Ashcroft from the Department of Physiology, Anatomy and Genetics was the first to discover the potassium channel and to show how it controls insulin secretion. She also identified the DNA sequence that codes for the channel. More recently, in collaboration with Professor Andrew Hattersley, an Oxford alumnus now at Exeter University's Penninsula Medical School, Professor Ashcroft showed how genetic defects in the potassium channel cause neonatal diabetes.

In the past, people with neonatal diabetes faced a life of insulin injections. However, the discovery that their diabetes is due to activating mutations in the potassium channel has enabled them to switch to sulphonylurea tablet therapy. This has not only enhanced their blood sugar control and lowered their risk of developing the secondary complications of diabetes; it has also improved their quality of life and that of their families.

Professors Ashcroft and Hattersley organised the first meeting for patients with neonatal diabetes and their families in July 2009, which enabled the families to meet one another as well as the scientists involved in the research.

Funded by the Wellcome Trust.