Parkinson’s disease may be incurable, but researchers at the University of Oxford are developing stimulation techniques that let the brain help control its symptoms. 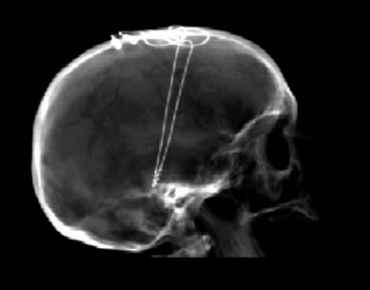 Parkinson’s disease, a disorder of the central nervous system, is currently incurable. But while it can’t be prevented, its symptoms, including shaking, rigidity, and slowness of movement, can be treated. The most common medication, levodopa, is often effective, but side-effects develop over time – so surgery is often used as an important alternative or adjunct.

In the late 1980s, animal models of Parkinson’s revealed that the disease was typified by increased activity in the subthalamic nucleus of the brain. Based on that, Prof. Tipu Aziz, from the University of Oxford’s Nuffield Department of Clinical Neurosciences, showed that the destruction of that area reliably improved the Parkinson’s symptoms, in turn spawning a treatment which uses high-frequency stimulation to achieve similar effects without destroying tissue. Since, he’s gone on to show that Parkinson’s patients with severe walking and balance issues also respond to low-frequency stimulation of another brain region, known as the pedunculopontine nucleus.

To date, over 100,000 patients have received deep brain stimulation for Parkinson’s disease by having brain pacemakers fitted – and their quality of life is drastically improved. But while stimulation continues to prove successful, it’s not perfect. Currently the implanted devices stimulate the brain continuously, which causes some neurological side effects and limits the life of the battery responsible for stimulation. Fortunately, Prof Aziz has teamed up with Prof. Peter Brown, also at the University of Oxford, to change that.

Prof. Brown previously succeeded in identifying distinctive, yet subtle, patterns of brain activity which are directly correlated with Parkinsonian symptoms, and developed a system that allows brain waves to be recorded during therapeutic stimulation. Now, Prof Aziz and Prof Brown are working together to develop an intelligent brain pacemaker which can interpret the signals in real time to deliver stimulation tailored to the patient’s condition at any instant. The upshot: more effective treatment, with fewer side effects.

‘Tipu Aziz has given me 5 years of freedom. After DBS, the improvements in my gait and loss of tremor have let me go on doing office work, and attend public concerts and dinners without embarrassment. My patients no longer ask me “And how are you today?”’