Research from Oxford has revealed details of the chemistry which humans use to sense changes in oxygen availability, opening the way to breakthrough treatments for diseases ranging from anaemia to cancer. 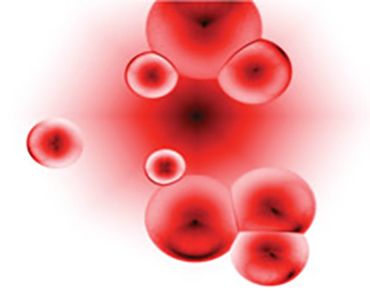 Red blood cells
We need to breathe oxygen to survive. Our circulatory systems deliver oxygen to every cell in our bodies where it is used as an energy source for just about everything we do, from movement and thinking to metabolising food. Without any oxygen we would die, but at intermediate levels of low oxygen, a condition called hypoxia, our bodies adapt. Perhaps the best example is at high altitude, where we adapt by producing more red blood cells to capture more oxygen from the atmosphere.

In the 20th century, scientists discovered that levels of a protein hormone called erythropoietin (EPO) increase substantially at high altitude, so triggering the production of red blood cells. This was one of the first indications that oxygen levels could be sensed. It later became apparent that nearly all cells are capable of sensing oxygen and adapting to hypoxic conditions – and research at Oxford was pivotal in discovering the chain of events that underlies this process.

Central to our response to hypoxia is a molecule called HIF (hypoxia inducible factor) – the master regulator of the hypoxic response. HIF switches on genes and triggers the production of proteins, including EPO, that help us adapt to low-oxygen conditions by increasing the delivery of oxygen to tissues and improving the efficiency of metabolism. In the 1990s, Professor Sir Peter Ratcliffe and Professor Chris Pugh from the Nuffield Department of Medicine showed that HIF is destroyed rapidly in the presence of oxygen. They teamed up with Professor Chris Schofield from Chemistry to discover the oxygen-sensing enzymes, known as the HIF hydroxylases that regulate this process.

“The HIF hydroxylases add oxygen atoms from the atmosphere into their products,” explains Professor Schofield. “This addition of oxygen signals for HIF to be destroyed. As atmospheric oxygen levels decrease, so too does the activity of the HIF hydroxylases – HIF escapes degradation and mounts the cellular response to hypoxia. The HIF hydroxylases provide a direct link between oxygen availability and HIF, and so act as oxygen sensors.”

Understanding of the chain of events that underlies hypoxia-sensing has opened up new therapeutic possibilities. “Inhibiting the HIF hydroxylases causes increased production of red blood cells, so is an alternative to EPO, which is widely used for the treatment of anaemia,” says Sarah Wilkins, co-worker of Chris Schofield. “The HIF hydroxylases are also of interest from a cancer treatment perspective, because cancer cells are often hypoxic.”

The Oxford researchers formed a company, ReOx, to enable the pharmaceutical development of their results. Presently, several major pharmaceutical companies have HIF oxygenase inhibitors in clinical trials for the treatment of anaemia and other hypoxia-related diseases.

“The Oxford work has not only identified the key mechanism by which human cells sense hypoxia but has opened up entirely new therapeutic possibilities – a recent concept for the treatment of anaemia, currently in clinical evaluation.”