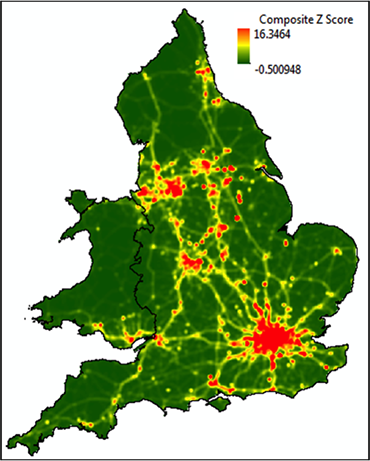 When it comes to Britain’s national infrastructure, providers of vital services – water, electricity, gas, waste, transport and communications – tend to operate and manage as independent entities, each ploughing their own individual furrow.

But research and analysis by the University of Oxford’s Environmental Change Institute (ECI) reveals how interdependent our infrastructures are. The ECI’s research has resulted not only in a better understanding of the consequences of interdependent failures but also in improved means of managing the risks of failure.

The flagship project in which the ECI is involved is the Infrastructure Transitions Research Consortium (ITRC). The ITRC informs the analysis, planning and design of national infrastructure, through the development and demonstration of new decision support tools – and with a keen eye on the impact of climate change. The ITRC works with 40 partners across government and industry and 10 academic institutions, and is led by Professor Jim Hall, director of the ECI. The ECI is responsible for project coordination and leadership of interdependent systems model development.

In 2013, the ITRC delivered a national infrastructure ‘hotspots’ analysis for Infrastructure UK, a unit within the Treasury which works on the UK’s long-term infrastructure priorities and secures private sector investment. The hotspot analysis was developed from an original idea by David Penhallurick of Infrastructure UK. Dr Raghav Pant and Mr Scott Thacker, at the ECI, led the team which provided the infrastructure hotspots analysis. The team collaborated with Dr. Stuart Barr and David Alderson at Newcastle University to develop the data and model outputs.

Working with Professor Hall, in a project managed by Miriam Mendes, Dr Pant explains that “we created a visual representation of ‘infrastructure criticality hotspots’, places where there is a concentration of critical infrastructure, measured according to number of customers directly or indirectly dependent on the infrastructures in that location. The nature of interdependencies among infrastructure providers, and their potential consequences in the event of failure, are not well understood. We took a holistic view, seeing them as inextricably linked instead of as individual organisations.”

The ITRC’s criticality hotspots work has generated great interest not only among the academic community but also from several other governmental policy-makers and industry practitioners. No wonder, for its analysis involved testing 200,000 failure scenarios; then, for each one, the consequential infrastructure impacts and the numbers of customers directly or indirectly affected were calculated and mapped. Having analysed the whole of England and Wales to identify locations that are particularly significant in terms of the potential consequences of infrastructure failure, there was a surprising result, as Dr Pant explains:

“The analysis of electricity and dependent assets identified hotspots in large urban areas. However, the hotspots are typically located around the periphery of urban areas rather than in the centre. A large number of criticality hotspots exist outside urban areas, where there are large facilities upon which many customers depend or where several critical infrastructures are concentrated in one location.”

The ECI’s research and modelling systems are now being deployed in a number of other sectors, with the ITRC having an impact at, among others, Defra, Committee for Climate Change, county councils, the Met Office, DECC and the National Grid. Further reports and briefing documents will be published in 2014 and 2015.

Funded by: The Engineering and Physical Sciences Research Council

I know when I asked the ITRC team to look at this that it was a challenging request but was very pleased with the results as the analysis and presentation of them has been very useful in explaining to others why we have to adjust our thinking from silo-sectored to a multi-sector and cross-sector one.