A computer science project coordinated by an Oxford computer scientist is developing robots that can help to relieve the isolation often faced by elderly or disabled people. 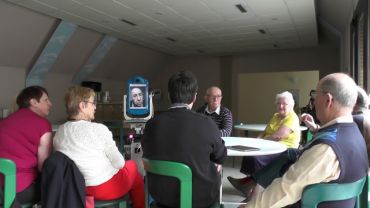 The TERESA Project.
To many people the word ‘robot’ conjures up an image of a machine undertaking purely mechanical tasks. However, Professor Shimon Whiteson in the Department of Computer Science has a different vision: one of socially intelligent robots which are able to go out into the world and act on our behalf, controlled by us but with the ability to react intelligently to the situations they find themselves in.

The TERESA Project, a collaboration between several European universities with scientific coordination provided by Professor Whiteson, has developed a robot that enables elderly people and others with mobility issues to continue to interact socially with others, without ever having to leave their room. Loneliness and isolation are major problems faced by many older or disabled people, but the TERESA robot provides an imaginative and revolutionary solution.

‘Telepresence’ robots (in which the robot’s ‘face’ is a video screen) are already commercially available and can perform a range of functions. The robot can be guided by remote control to go out and be the owner’s representative, enabling someone who is unable to be there in person to communicate remotely with other people, and giving an isolated person a physical presence in the world. However, the robot is still relies heavily on its owner to make the decisions about how it ‘behaves’.

The TERESA project adds a vital dimension: social intelligence. The researchers have developed methods that enable the robots to perform social functions automatically, so that the human controller never needs to make decisions about how the robot should move around or what postures it should adopt. TERESA robots are able to navigate semi-autonomously among groups, maintaining face-to-face contact during conversations, and displaying appropriate body-pose behaviour – in a similar way to human beings. Algorithms that can interpret social behaviour are able to detect facial emotions such as the intensity of a smile, for example, and respond accordingly. Thanks to the robot’s social intelligence, the human controller is free to focus on interactions with other people, instead of worrying about manually navigating the robot or adjusting its position and orientation.

In the short term, components of the TERESA robot are already heading towards commercialisation – for example, the algorithm that prompts the robot to automatically lower its ‘head’ to communicate when it detects that someone is sitting down, a behaviour that instantly renders the robot more ‘human’. In the long term, the TERESA project will pave the way for the deployment of socially intelligent robots in settings such as elderly people’s homes, schools and hospitals, all of which require substantial human interaction.

'Telepresence robots have found an important application in telehealth and telecare, particularly in helping elderly live longer at home in a safe and dignified way. Experience has shown, though, that what are natural human gestures and behaviors in face-to-face encounters are not so natural when navigating a robot, and this limitation of the current technology has proven a drawback in practical deployments. The ambitions of the TERESA project will significantly expand the breadth of use cases for telepresence in remote care, saving money and improving quality of life.'