Every Cloud has a Silver Lining: saving a forest for the benefit of clouded leopards and humans | University of Oxford
Skip to main content

Based on research at the University of Oxford, two short films were created to inform the wider public of the importance of Malaysia’s Ulu Muda forest as a water catchment reserve and as home to many forest species including the threatened clouded leopard. These videos helped to secure 100,000 petition signatures which resulted in the ban of logging in Ulu Muda. 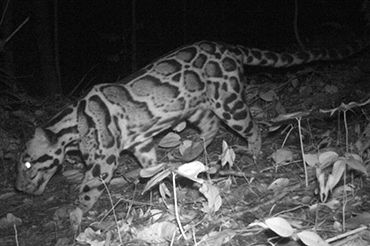 An image of a clouded leopard taken by a camera trap in the Ulu Muda forest.
The clouded leopard (Neofelis nebulosa) is in decline in Southeast Asia and China, with a total adult population now thought to number fewer than 10,000. The clouded leopards are threatened by habitat loss following large-scale deforestation and are subject to poaching for skins and body parts. Many forest areas that remain are too small to sustain clouded leopard populations in the long term.

For several years, University of Oxford researcher Dr Cedric Kai Wei Tan has been researching the habitat preferences of clouded leopard populations in the Ulu Muda forest in Malaysia, and examining the impact of habitat loss. Ulu Muda is extremely important for many forest species, and also vital for the four million people who depend on it as a water supply for drinking and crop irrigation. The Malaysian Government has taken steps to safeguard the forest by designating a number of protected areas, known as the Central Forest Spine (CFS).

In collaboration with nine other researchers studying wild cats in Malaysia, Dr Tan assessed how far the CFS was working. The research revealed that, while the CFS had good potential, the condition of these forests had been deteriorating because of poor management. As well as publishing a scientific paper (https://www.sciencedirect.com/science/article/pii/S0006320716305134) the team disseminated their findings through an animation (https://vimeo.com/198191339).

The research revealed the true extent of illegal logging and poaching taking place at Ulu Muda. Virgin forest which was technically protected was nevertheless being felled, and logging was destroying salt licks used by animals and causing waterways to fill with mud from soil erosion, affecting both animals and people.

Dismayed by these discoveries, Dr Tan led a team to create a short film called ‘Saving Ulu Muda’ (https://www.youtube.com/watch?time_continue=1&v=yYEEa5t_Ugo) that urged the public into taking actions to protect this forest. The Malay version of the film was broadcast on national television. The two films helped to secure more than 100,000 signatures on a petition which was sent to the Federal Government. In October 2018, just one month after the petition was submitted, logging permits were revoked, helping to save a forest for the benefit of both humans and wildlife.

In the UK, Dr Tan has turned this research into a powerful interactive theatre experience which has been performed live at science festivals, and also made it into a film. Audiences make key decisions in the plot, which takes the play to one of five endings, prompting them to engage with the difficult choices faced by the people who live off Malaysia’s forest resources and have an impact on the clouded leopard’s survival.

Other acknowledgements: Peninsular Malaysia's Department of Wildlife and National Parks (DWNP), especially its former Director General Dato' Abdul Rasid Samsudin, for research permits and continuous support throughout the project; Malaysia's Economic Plan Unit (EPU) for granting the necessary permits (UPE 40/200/19/3171 & UPE 40/200/19/3092) to conduct field research in Malaysia; Mr. Hymeir Kem for support in the field and Earthlodge for logistics support for the research at Ulu Muda.

“I’m so proud to be part of the team that created such extraordinary impact from powerful research. Ulu Muda is vital for securing water resource for the locals, being able to save Ulu Muda from logging would mean so much to both the locals and the researchers that are passionate about conservation.”