Although it does not have a discrete drama department, the University of Oxford has many scholars with expertise and research interests in theatre, whether it be Anglophone, European, Chinese, Central Asian or Scandinavian. Their work is well-known nationally and internationally, and now a new project, Connecting Oxfordshire Theatres with Research, is ensuring that the University’s extensive knowledge is more readily available to theatres within Oxfordshire itself whilst, at the same time, allowing researchers unique insights into theatre practice. 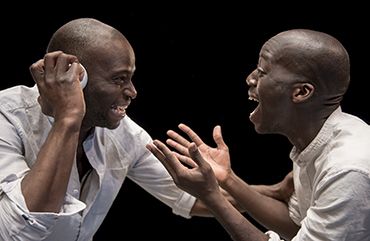 The Island (L-R) Mark Springer as John and Edward Dede as Winston.
Set up in February 2016, Connecting Oxfordshire Theatres with Research is part-funded by the Arts and Humanities Research Council and run by three academics – Professor Kirsten Shepherd-Barr, Dr Selena Wisnom, and Dr Brian McMahon. Their brief was to undertake a “scoping” exercise, researching in depth the thriving and diverse theatre scene in Oxfordshire to foster firmer links between Oxford’s academics and regional theatres as well as enhancing the university’s engagement with local communities through theatre. Already the project has reaped dividends, and, says Dr Wisnom, Junior Research Fellow in Manuscripts and Text Cultures at The Queen’s College, an open, receptive approach was a vital ingredient in its success.

“We began the initiative by contacting theatres, including The Theatre Chipping Norton and the Oxford Playhouse – which are the biggest producers of new work in the region – as well as others such as The North Wall, Pegasus Theatre Oxford, The Old Fire Station, and The Mill. Theatre companies and directors were also interviewed. They were receptive to the idea of a flexible, reciprocal collaboration with the university. The more we listened, the more it was apparent that theatres welcomed the sharing of knowledge and co-creation, where both sides are interested in a particular issue or theme and develop ideas together.”

A workshop, held in May 2016, facilitated contacts between the theatres and university. It also proved a fertile ground for the generation of ideas, not least the creation of a TORCH Theatre and Performance Network. Now up and running, the Network, led by Professor Julie Curtis and Professor Kirsten Shepherd-Barr with support from other researchers, is a forum bringing together Oxford academics working on drama and theatre, while also connecting them with theatre professionals within Oxfordshire and beyond. Events range from lunchtime talks and reading groups to seminars and full-day conferences, often bringing external scholars and theatre makers to Oxford. The Network’s activities focus on theory and practice: on texts, performances, theories of drama, translation issues, and staging.

Professor Shepherd-Barr, Professor of English and Theatre Studies in the Faculty of English and a Fellow of St Catherine's College, works regularly with theatres including the National Theatre, the Old Vic and Donmar Warehouse, while in Oxfordshire she has worked with Pegasus, the Oxford Playhouse, and The Theatre Chipping Norton. Professor Shepherd-Barr sums up the rationale and impact of Connecting Oxford Theatres with Research:

“Oxfordshire has a thriving theatre scene with many talented playwrights, directors and actors. We have been able to help connect them with academics, who can contribute to their work in a number of ways, providing expertise on facts, context, history, translation and interpretation. Piloting new work and taking plays to schools will also become part and parcel of the project, the overriding aim of which is simple: to create new pathways for mutually beneficial collaborations between University of Oxford researchers and regional theatre makers.”

'The Theatre Chipping Norton has been finding an increasing number of ways to interact with and benefit from the input of Oxford University academics and researchers. From contributing to rehearsal processes and sharing knowledge about the social and historical context of the work we produce, to supporting and working alongside our creative staff in the development of new work, their expertise is helping us enter exciting new territory. We hope that over the coming years it will benefit both artists making work with The Theatre, and our audiences.'