Marenka-Thompson-Odlum and colleagues examined the Pitt Rivers’ Collection Development Policy in the light of initiatives to decolonise the museum, gaining insights and recommendations which will inform a policy update. 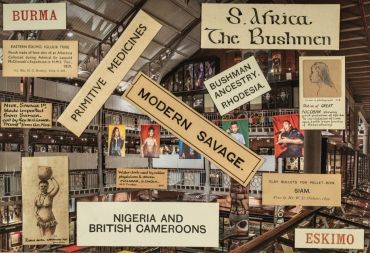 A montage of old problematic museum labels superimposed on image of the museum interior.

The Pitt Rivers Museum in Oxford houses more than 500,000 objects, photographs, and manuscripts from all over the world, and from all periods of human existence.

The Museum’s Collection Development Policy (CPD) is an important but rather dry document, running to 15 pages of text and governing acquisition, care, and disposal of these objects. According to Curator and Research Associate, Marenka Thompson-Odlum, staff rarely consult the document; and the museum’s practice in these areas, and its five-year Strategic Plan, are more forward thinking than the policy. Why then does the CPD matter?

“Well, it’s a requirement of Arts Council accreditation that every museum has a policy, and that it’s updated every five years,” explains Thompson-Odlum. “But more importantly, the CDP should be a living document, reflecting and informing what we do – rather than something that is left on the shelf and irrelevant to our everyday work.”

Although much of the Pitt Rivers’ collection has been acquired within a colonial context with little consideration of the people and cultures to whom the objects belong, the museum has made significant efforts to ‘decolonise’ its collection and activities in recent years.

“When we acquire an item now, we work in partnership with the maker, owner, or relevant community to ensure that it is displayed, cared for and – if appropriate – removed from the collection, in a way that reflects their wishes and culture. And our work on relabelling exhibits is striving to remove inappropriate language and reflect the significance of objects to their cultures, rather than to museum audiences. But little of this is currently reflected in the CDP,” says Thompson-Odlum.

In the museum’s current collecting project, for example, cultural care is being officially written into the exchange. Quilts made by the Poakalani quilters in Honolulu will be slept under at least once to imbue them with energy before they are displayed; and a tonkori (plucked string instrument played by the Ainu people of Japan), will be kept in a constant state of readiness to be played for, as Oki its maker says, “what is an instrument that cannot make sound”.

For the Policy Matters project, funded by the Knowledge Exchange Seed Fund, Thompson-Odlum worked with four interns and external stakeholders to examine the CDP and suggest ways in which it could evolve to reflect current practice. Interviews with artists, museum staff, and international curators were used as the basis for a podcast series and an internal workshop in July 2021.

“The process was really interesting,” says Thompson-Odlum. “By critically examining the policy we realised that it doesn’t adequately acknowledge the museum’s colonial past and the unethical way in which many objects may have been acquired. Much of the language is no longer appropriate and does not reflect the museum’s growing vision. Ideas such as the commitment to ‘preservation’ are also difficult, not simply because some objects are meant to be used or decay, but because concepts of care differ between cultural groups.”

“The knowledge exchanged during the interviews and workshops has changed the way we think about policy at the museum and the insights will be published in a report written to guide a re-draft of the CDP,” says Thompson-Odlum. “We hope and expect that the new policy will reflect our commitment to partnership in the collection, curation, and interpretation of objects – and put people and communities at the heart of policy and practice.”

Thanks to Sound Engineer, Dougal Lott, who produced the podcast.

“When I go into the museum in person there are lots of beautiful, amazing artefacts that are created by people. It’s full of details, cares, and human qualities. I do wish the policy can be returned in a more compassionate language.”

Eiko Soga, Artist and DPhil candidate at the Ruskin School of Art and St Johns College, University of Oxford

“In the Pitt Rivers Museum CDP, I didn’t notice anything that talks about what to do when you find something in the collection that should never have been acquired.”