Pioneering research has uncovered the inherent secrecy of global rule-making bodies, making them more accountable, enhancing democracy and illustrating the winners and losers from their practices 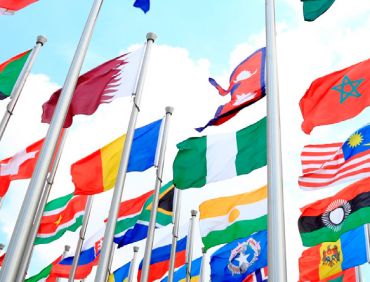 Flags of the world.

The last two decades of the 20th century saw the rise of an initially unheralded phenomenon: the way in which a number of private-sector standards bodies became global rule-makers. Governments in many countries, lacking resources and expertise, were content to allow the oft-unwritten delegation of regulatory power to bodies such as the International Accounting Standards Board (IASB), the International Organization for Standardization (ISO) and the International Electrotechnical Commission (IEC). These and other bodies have gone to exert a huge influence on global rules in finance and trade.

But as the Latin phrase traditionally attributed to the Roman poet Juvenal has it: Quis custodiet ipsos custodies? Who watches the watchmen? And what is the global effect of technical rule-making by the private sector on both the evolved democratic nations and those where democracy is just taking root? Who wins, and why?

These questions have long preoccupied Walter Mattli, Fellow in Politics at St John’s College and Professor of International Political Economy at the University of Oxford. Together with Tim Büthe, associate professor of political science at Duke University, he undertook the first systematic empirical investigation of the practice of private standards bodies. Mattli and Büthe aimed to end the inherent secrecy of private rule-making and make the processes of the standards bodies more open and transparent.

Taking the ISO and IEC – which collectively account for 85 per cent of all international product standards – as well as the IASB as the foundation of their research, Mattli and Büthe conducted business surveys in five countries of top and mid-level managers in leading global businesses across several industries. They found that international standards bodies act autonomously, and often without representation of all the appropriate stakeholders within and across societies. China and India, for example, are frequently under-represented. The methodology of the standards bodies amounts to a democratic deficit.

Mattli and Büthe set out their findings in an award-winning book, The New Global Rulers: The Privatisation of Regulation in the World Economy (Princeton University Press, 2011). They have gone on to further the debate in a number of arenas, from the academic and the mainstream media to the political.

In 2012, the European Parliament held a workshop on international standardization, citing especially Professor Mattli’s work on policy implications in the EU. The World Trade Organization has also benefitted from Mattli’s pioneering investigation, as have private companies, international trade lawyers (for whom debate about which norms are legally binding is ever-present) and emerging economies.

China now has representation on the IASB and other major emerging economies are also seeking to strengthen their voice in private-sector rule-making bodies. The practices of international bodies – initially unheralded, and for so long a mystery – are now becoming accessible and understood.

‘This is probably the single most important issue now before the World Trade Organisation Technical Barriers to Trade Committees. Walter Mattli has been a pioneer in this field and will continue to be a point of reference in this discussion.’