Sophisticated computer models of the heart, developed by computer scientists at the University of Oxford, are helping to predict which new drugs are free from cardiac-related side effects. 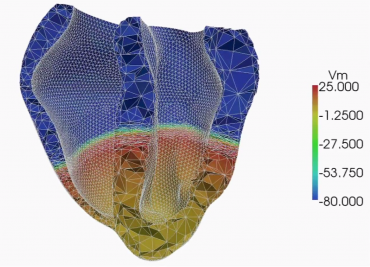 Modelling the effects of drugs on the electrophysiology of cardiac cells.
New drugs cost pharmaceutical companies millions of pounds to develop, yet almost half of them never make it to market because they are discovered or considered to have adverse effects on the human heart, most commonly causing arrhythmia (abnormal beating). Occasionally these arrhythmias can be fatal, so pharmaceutical regulators demand that the risks are minimal.

Researchers at the University of Oxford have developed computational techniques that are able to model the effect of specific pharmacological compounds on the heart and flag up problems early in drug development. As early as the 1960s Professor Denis Noble, a physiologist from the University of Oxford, had recognised the potential of mathematical models of the heart and developed a prototype. Building on this work, Professor of Computational Biology David Gavaghan and his colleagues have constructed a computer model which accurately replicates the effects of drugs on the electrophysiology of cardiac cells.

Electrophysiology – the flow of ions in and out of cells via ion channels – drives the heart by releasing calcium to make the muscles contract and pump blood. By modelling the likely effect of a drug on an ion channel, embedding that within a model of a cell and then embedding that within a model of the whole organ, it is possible to predict which drugs are likely to cause heart problems, long before they enter clinical trials. The computer code developed for this application (Chaste - Cancer, Heart and Soft Tissue Environment) is now freely available and has been downloaded by hundreds of groups worldwide including NASA and the US Food and Drug Administration.

The researchers work closely with pharmaceutical companies such as GlaxoSmithKline and Roche, who now routinely use these computer modelling techniques as part of their drug development process. As well as reducing costs, there is also the potential for replacing animal experiments with computer-based ‘in silico’ screening. The research has attracted funding from the UK’s NC3Rs, which leads the discovery and application of new technologies and approaches to replace, reduce and refine the use of animals for scientific purposes. As a result, GSK has already started to reduce the number of rabbit tissue studies it carries out.

In future this approach promises major benefits for patients as well as for the pharmaceutical industry. By combining these modelling techniques with genetic screening methods to determine which individuals are likely to be susceptible to a particular side effect, it will possible to accelerate the introduction of new drugs to the market. Potentially it could also lead to the reinstatement of drugs that are currently withdrawn, for use by individuals in whom they cause no adverse effects.

Funded by: The European Union, NC3Rs, EPSRC, the Wellcome Trust and the Royal Society.

‘Computer modelling techniques are routinely used at pharmaceutical companies including GSK, to predict untoward side effects earlier. The application of computer-based ‘in silico’ screening allows us to enhance study design and we are better placed to assess and respond to risks.’