When the operas for children that Oxford University lecturer in Music Prof. Martyn Harry composes tour Britain’s toughest regions, his work is often the first classical music his audiences have ever heard. 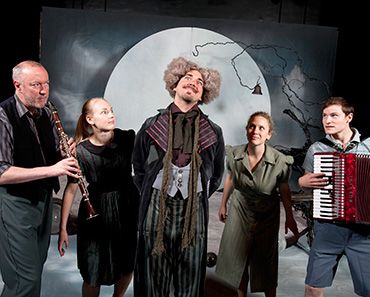 Theatre Hullabaloo & Action Transport Theatre performing 'My Mother Told Me Not To Stare'.

Over the course of its multiple national tours, Prof. Harry’s opera My Mother Told Me Not To Stare has played to thousands of children, in Oxford and London as well as locations further afield such as Darlington and Huddersfield. And with a CD version of this dark cautionary tale My Mother could lead a whole generation of British children to investigate contemporary classical music.

Produced in collaboration with arts organisations Theatre Hullabaloo and Action Transport Theatre, My Mother pulls few punches, despite its target audience of eight-year-olds and up. To Prof. Harry, the key is communication. My Mother’s plot is darkly operatic, concerning naughty children who vanish to a mythical land, but its music hits home without requiring any previous exposure to classical or contemporary composition. So the young audiences experience music that speaks directly to them – of their hopes and their fears – but in the form of classical music.

It’s something Prof. Harry sees as a unique challenge: composing music for children without trading depth for accessibility. What he discovered was that such work honed skills necessary for any modern classical composition. So the learning became a two-way street. Harry’s various pieces for three- to nine-year-olds expose them to new musical forms, while the compositional practice he developed has become one aspect of his teaching to new composers at Oxford.

It has even influenced Prof. Harry’s other composition. His orchestral work galgenhumoreske, which Oxford Philomusica debuted at the Barbican in 2012, could be seen as the adult’s version of My Mother: while Prof. Harry believes knowledge of Mahler and Nielsen might foster deeper appreciation of the piece, he reports finding fans of the work amongst Oxford musicologists and A-level students alike.

‘Martyn Harry’s music and composition has been inspirational to me personally as a theatre maker and artistic director. ‘My Mother Told Me Not to Stare’ fully exploited the range and scope of the performers, and opened up the opera form for children and adults – many of whom had never experienced opera or music theatre of that nature before. Whilst experimental and surprising, the music was accessible and incredibly engaging.’