Classics for the people | University of Oxford
Skip to main content

The Iris Classics Centre popularises study of the ancient world, enriching the lives of students and adults alike. 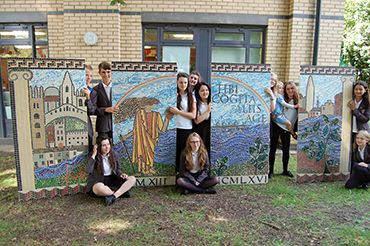 Mosaics created at Cheney School.
Rumours of the Death of Classics appear to be an exaggeration. Thanks to the work of The Iris Project, together with the research and input from Oxford University’s Classics Faculty, ancient languages and culture are alive and well in many inner city state schools and communities.

Dr Lorna Robinson, who studied Classics at Lady Margaret Hall, Oxford before writing extensively on Ovid, Magical Realism and the works of Gabriel Garcia Marquez, founded The Iris Project in 2006 to popularise learning about the ancient world. The educational charity undertook a number of initiatives, from publishing Iris, a Classics magazine (available free in state schools), to hosting Latin and Greek drama and literacy projects in London, Oxford and Swansea, before setting up The Iris Classics Centre at Oxford’s Cheney School.

“Since the Centre opened, in October 2013, its classes and courses, as well as festivals and themed days, have reached more than 3,000 students,” says Dr Robinson. “On top of that, we have had hundreds of children locally and from further afield attending workshops and other events. Adults have also enjoyed evening and weekend activities and courses, and we’ve hosted trips to key classical sites such as Hadrian’s Wall and the Roman baths at Bath.”

The Centre, run in partnership with the University of Oxford, is the first dedicated community Classics centre in the UK. Oxford’s Classics Faculty has been integrally involved, with its academics, postgraduates and undergraduates teaching at the Centre and at supporting events, workshops and projects, as well as in primary schools. Among them is Professor Stephen Harrison, who has given talks to audiences of all ages on Classics in film and Latin texts. “These talks relate closely to my research interests in classical reception and Latin poetry,” says Professor Harrison. He has also participated in many popular outreach events, which have attracted speakers such as Carol Ann Duffy, the Poet Laureate, and Mary Beard, the well-known writer and academic.

At Cheney School, GCSE Classical Civilisation is now offered via an after-school lesson to Year 9s. Students can study Latin to A level, and Ancient Greek is taught during a popular lunchtime club. And thanks to Arts Council Accreditation, the School is set for another first:  becoming the first ‘museum school’, where artefact collections and museum learning are embedded into the layout and curriculum of the school.

“We’ve been delighted at the way the Centre has developed,” says Dr Robinson. “Classics engages students on many different levels and from the widest possible range of backgrounds, whether through evening talks delivered by lecturers from the Faculty of Classics on topics like Rome and Hollywood, or Design and Technology projects involving making sundials and mosaics. We see, first-hand, how Classics enriches people’s lives.”

'Working with the Classics Centre has been fantastically exciting, and has developed in ways that we never would have predicted. In 2016, we had almost 40 Year 9 students staying after school to learn about ancient Pompeii as part of GCSE Classical Civilisation. The opportunities and projects offered enable our students to learn ancient languages and classical topics they might never otherwise have encountered. This has therefore been a uniquely enriching partnership between a charity and a school.'