Scientists at the University of Oxford are developing yet further a computer model that will forecast the environmental risks to Britain’s coastline for decades ahead. This will be of immense value to local authority planning departments. 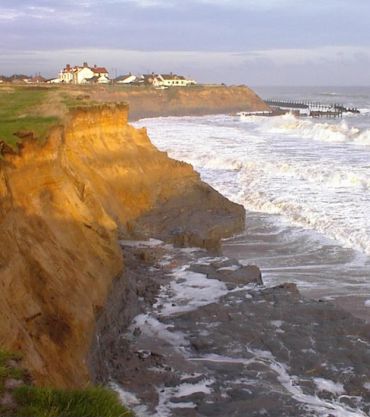 Coastal cliff erosion on the east coast of the United Kingdom.

Calculating the risks of coastal flooding and cliff erosion has become ever more important as the UK’s weather patterns change and sea levels rise. The capability to do that depends upon having reliable data. Developing such data and creating a model for forecasting has been the work of scientists such as Professor Jim Hall, Director of Oxford University’s Environmental Change Institute.

Around 35% of the UK’s coastline is vulnerable to flooding or erosion. Some areas are especially susceptible such as the East Coast. Research in Norfolk and Suffolk by Professor Hall and other scientists has shown how coastal areas respond to the forces of nature over years, decades and centuries.

By measuring the changes in coastal formation and recording how these changes occur – e.g. by sedimentary movement, wave height, wave direction etc, - the scientists have been able to construct a simulation model of the whole process of coastal change. Much of this process is self-regulating, e.g. rocky cliffs erode to form beaches below. More dramatic are those instances where soft cliff erosion leads to a build up of new headlands miles down the coast.

The current coastal model – created by Hall and two other scientists - focuses on cliffs and beaches, but the newer, more advanced model will include estuaries, tidal inlets, sand dunes, spits and sandbanks. The East Anglian coast, which has long been the subject of Professor Hall’s research, has many examples of these. Meanwhile Hall’s colleagues in Manchester are looking at the coastal impact of offshore energy devices.

This research by Hall and his colleagues has applications far beyond East Anglia. In the UK the coastal model is being used by the Environment Agency and local authorities, when assessing long- term plans for coastal and offshore development. Beyond the UK New Zealand has shown interest. Other countries are likely to follow.

"The new insights of potential coastal change being delivered by the iCoast Consortium could bring about a step change in our understanding and management of the coast. Only by understanding the full picture of the effects of both natural change and the influence of human activity over the long-term and large scale will we be able to manage flood and erosions risk sustainably"