Bringing together universities, industry and the NHS to benefit people in the Oxfordshire region and beyond | University of Oxford
Skip to main content 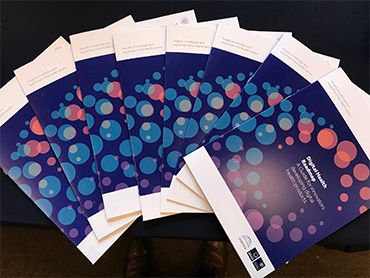 Digital Healthcare Roadmap
The Oxford Academic Health Science Network (AHSN), set up in 2013, covers a population of three million people living in Oxfordshire, Milton Keynes, Berkshire, Buckinghamshire and parts of Bedfordshire. It brings together regional partners and enables research by the University of Oxford to have an impact in the region. Recent initiatives show how well Oxford AHSN is turning innovation into mainstream clinical practice, improving health and creating wealth through better connections between the NHS, research and business.

Take the launch of an interactive digital health roadmap to help innovators overcome the complexities and challenges of developing digital products to improve health. It draws on university research, insights from Oxford University Innovation and the Oxford AHSN’s understanding of the pathway from concept through to adoption in the NHS and other healthcare systems. The roadmap enables innovators to ask the right questions at every stage including design and development, interoperability, information governance and data management. It also helps them navigate the regulatory framework and engage in clinical testing, while developing a commercial model. The roadmap was developed after identifying a gap in support for SMEs developing and commercialising digital health products including health management apps, wearable tech and online interactions.

The University of Oxford contributes to the Oxford AHSN in many other ways, not least through the involvement of the Oxford Martin School – a community of more than 200 academics at the university which has provided £300,000 to create an Affordable Medicines programme focusing on establishing new, ‘open innovation’ models of drug discovery as an alternative to the traditional ‘closed’ model of research and development (R&D). Its inter-disciplinary team – led by Professor Chas Bountra of the Structural Genomics Consortium - is evaluating a range of models in the life sciences sector. The School has also established two new post-doctoral positions and published a policy paper on transforming drug discovery which explores the potential to increase productivity in pharmaceutical R&D.

Another successful project was setting up a Science and Innovation Audit (SIA) for Oxfordshire. A collaborative approach by a consortium of seven members, including Oxford AHSN, the university, the Oxfordshire Local Enterprise Partnership (OxLEP), the UK Atomic Energy Authority and the Science and Technology Facilities Council, focused on four areas of technology that will have a huge impact on the public: digital health, space-led data applications, autonomous vehicles, and quantum computing. The SIA found that Oxfordshire is ideally placed to drive the UK economy forward in these areas of transformative technology which, if fully utilised, could be worth some £180 billion to the UK by 2030.

More immediately, the Institute of Biomedical Engineering at the University of Oxford, supported by the NIHR Oxford Biomedical Research Centre, developed a digital health solution known as GDm-Health. This is an innovative smartphone app to help women who develop diabetes during pregnancy.

Oxford AHSN played a key role in the development of the app, which has been trialled across multiple sites in Oxfordshire, Buckinghamshire and Berkshire, and has now been licensed exclusively to Drayson Technologies through Oxford University Innovation. The app tracks blood glucose levels, and enables swift communication between pregnant women with gestational diabetes and specialist midwives. Data is transferred simply and securely in real time, enabling instant review and feedback. By March 2017 almost 2,000 women had taken part in the regional pilot.

Of the partnership with Drayson Technologies, Professor Lionel Tarassenko, Head of Engineering Science at the University of Oxford, says: “We have combined world-class engineering and clinical research with feedback from frontline NHS staff to create products that deliver real benefits to patients. Working with Drayson Technologies gives us a unique opportunity to accelerate the development and deployment of these digital health products.”

“Oxfordshire has proven its ability to create internationally-recognised clusters in areas such as life sciences and the automotive industry. There is little doubt that we can play an even bigger role in the UK’s drive for economic growth.”