An Oxford academic oversees the digitisation of René Pomeau’s definitive critical edition of Candide, first published by the Voltaire Foundation in 1980 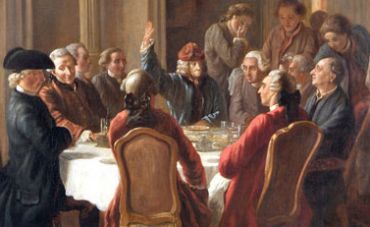 Among booklovers Voltaire’s Candide, first published in 1759, needs no introduction. Despite religious and secular denunciation upon its publication, the book went on to become one of the key texts of the Western Canon. No wonder, say its advocates: Candide’s blend of satire, wit and adventure makes it among the best of all possible books.

Now, thanks largely to the work of Professor Nicholas Cronk and the Voltaire Foundation, Candide is available to a huge new audience as an iPad app and a free website. Further versions will be released to keep pace with new technology. And, pour encourager les autres – as Voltaire would have it – the pioneering work could revolutionise the way readers interact with literature.

The starting point for the free digital edition of Candide was René Pomeau’s definitive critical edition published by the Voltaire Foundation, a research department at the University of Oxford, in 1980. Professor Cronk, director of the Voltaire Foundation, acted as academic advisor and oversaw a collaboration between Orange and the Bibliothèque nationale de France (BnF) to create the digitised version of Candide. The aim was to make Voltaire’s masterpiece accessible to the widest audience possible.

The result is an enhanced edition of the original manuscript of Candide, complete with the annotated text, high-resolution images of the manuscript, audio, critiques, illustrations, thematic maps and a collaborative space to enable users to interact with each other. There are two levels of annotations for readers, ‘discovery’ and ‘research’, making the app a useful tool for both academics and students. Thanks to these two levels, as well as a map of the world charting Candide’s travels, readers can choose their own way into the text, free to wander much as Voltaire’s protagonist did.

An international project, aimed at school students initially, the app also has a garden, in which readers can publish a notebook made up of their own comments and their favourite analyses. Each notebook takes the shape of a tree of learning in the garden, but the app’s benefits are not confined to students and researchers. Anyone can enjoy it, thanks to three ways of reading the text: as a digital text (with references at hand), as the original BnF manuscript, or as interpreted by the leading French actor Denis Podalydès. With further enhancements planned, the app makes for a congenial and contemporary way to cultivate the Voltairean garden.

‘In the best of all possible worlds, more publishing houses would look to the example of Orange, the Bibliothèque nationale de France and the Voltaire Foundation with their new, digitally enhanced version of Voltaire’s Candide. This new digital version may be better named an ‘experience’ rather than simple digital book.’