Research into forest ecology at the University of Oxford is helping to reconcile the competing pressures of biodiversity and economic development. 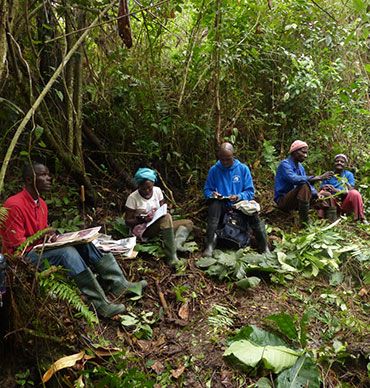 Natural forests in many parts of the developing world are under serious threat from logging, conversion to agriculture and mining. The tension between maintaining biodiversity and encouraging economic development can become acute, and a blanket requirement to ‘protect forests’ is unlikely to be successful in poorer countries with limited options for income generation.

Dr William Hawthorne’s research tackles this problem head on. An expert in the ecology of the forests of Ghana, he has created a forest mapping tool that makes it easy even for non-specialists to identify areas of high biodiversity that need to be protected. At its heart is Dr Hawthorne’s observation that, even on a fine scale, globally rare plants tend to be clustered in ‘hotspots’, while heavily-exploited timber species are often clustered in different areas.

This pointed to the possibility of using rapid survey techniques and mapping to secure the preservation of areas with high concentrations of rare plants, whilst allowing logging to continue in other areas, and prompted Dr Hawthorne to develop three ‘biological indices’ to assess species richness and threats within forest communities. The Bioquality Index, for example, is based on a ‘Star’ system of categorising species according to rarity, and is used to identify ‘bioquality hotspots’. The other indices concern forest regeneration and the distribution of commercially exploitable trees. These indices were incorporated into ‘Rapid Botanic Surveys’ which have now been used to protect key forest areas across the globe. These rapid surveys also include local perceptions of which forest areas and which plants are the most important.

In Ghana, the government has introduced legislation to restrict logging in line with Dr Hawthorne’s ‘Star’ system, and used his Bioquality Index to identify and establish around 2,300 km2 of forest reserves (13% of the total forest network) which are excluded from timber harvesting. In Liberia, the mining company ArcelorMittal commissioned Dr Hawthorne’s group to carry out a Bioquality assessment of the mountainous West Nimba region, a global biodiversity hotspot also rich in iron ore, and used this to make significant conservation decisions which have protected important forest sites.

Dr Hawthorne’s methods have also been applied in many other African countries, as well as in Malaysia, Brunei, Mexico, Honduras, Chile and Trinidad and Tobago. His work is thus helping to reconcile the demand for the conservation of biodiversity with the need to support local agricultural and economic development in many parts of the world.

Research funded by: the Overseas Development Agency, the Department for International Development (DFID), the 6th EU Framework Programme for Research and Technological Development (EU FP6), the Oxford Martin School and others.

‘[Dr Hawthorne’s] work confirmed the biological importance of forests in northern Nimba from a global perspective. Botanical mapping ... helps us to determine key areas of importance in planning our strategy for forest conservation and offsets. [The work also] identified priority species for plantation trials which are highly important to local communities who depend on these plants for medicine, food, and construction materials.’