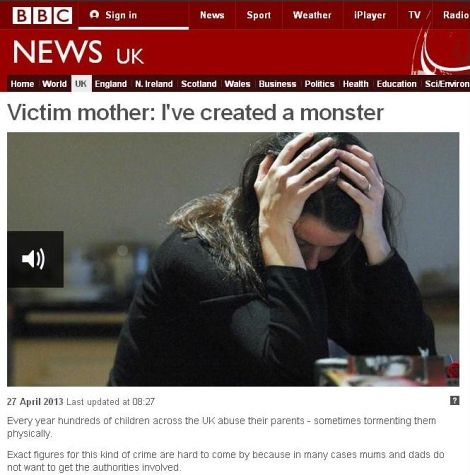 Extract from BBC news website.
What needed media coverage?
Why was media coverage important?
What was the role of the Press & Information Office?
Results for the project

Investigating Adolescent Violence towards Parents (APV) is a three year research project and the first large-scale academic study of APV in the UK. Dr Rachel Condry and Dr Caroline Miles, from the Centre for Criminology in the Law Faculty, carried out the research funded by the Economic and Social Research Council. They found that parents living in fear of their abusive and violent teenagers are being left without support because of a lack of understanding of adolescent violence directed at parents.

The research aims to increase the visibility and understanding of APV and to develop clear recommendations for effective policies and appropriate interventions for these families and the criminal justice agencies they encounter.

Other forms of domestic abuse, such as child abuse and intimate partner violence, have come to light in recent decades, but very little academic literature exists on the problem of teenagers who hit or abuse their parents. There was little support for parents in such circumstances from police, youth justice teams or other agencies so they had nowhere to go for help.

The researchers’ analysis of ’raw’ data from the Metropolitan Police database revealed that there were 1,892 reported cases of 13- to 19-year-olds committing violence against their own parents in Greater London alone over a 12-month period from 2009-10.

Dr Condry and Dr Miles mapped out the victim, offender and incident characteristics of reported cases, as well as the scale of the problem in Greater London. This was the first analysis of adolescent to parent violence cases reported to the police, as police authorities do not currently flag such cases. The researchers identified the scale of the problem, using information they had requested from the Metropolitan Police database.

The researchers found that the problem of APV was largely unrecognised by policymakers. Professionals working within the criminal justice system had no specific guidance on how to deal with it.

Why was media coverage important?

The researchers wanted nationwide media coverage given the enormous public interest in the issue of Adolescent to Parent Violence. They felt it was important to help make affected parents feel they were not alone and wanted to raise the profile of this issue so that recommendations for policies and interventions were put in place. Highlighting the issue in the media was one way of putting it on the political agenda.

APV is a sensitive topic, which is why it was particularly important for the researchers to take the initiative and try to control messages about their work.

What was the role of the Press & Information Office?

The Press & Information Office was approached by Dr Rachel Condry, the lead researcher of the project, after she was contacted by a journalist from the Today programme on BBC Radio 4. He had been tipped off about her research, but Dr Condry was not in a position to talk freely because the research was due to be published in an academic journal. The Press Office advised her to confirm the information he already had about the paper, but to decline his request for a live interview in case she revealed too much ahead of the academic publication. This resulted in a report on the Today programme that mentioned that a study had been carried out by the Centre of Criminology at Oxford University, which found that ‘between 2009 and 2010 there were 1900 cases of children abusing their parents in greater London alone.’

Other media outlets started to contact Dr Condry about the issue of APV. The Press Office filed these expressions of media interest, but Dr Condry waited until her study was published before doing any further media work.

When she received confirmation from the academic journal on the date of publication, Dr Condry approached the Press Office about devising a media strategy. This research story was likely to gain widespread coverage in the national media. However, because of the sensitive nature of the story the Press Office advice was that she should provide the story as an exclusive to one outlet in the first instance. The story was pitched in the form of a press release, drafted by the Press Office and approved by Dr Condry, to The Guardian (a newspaper that tends to be read by professionals dealing with young people and families). The story appeared in both the print and online versions of The Guardian. In the days that followed, the story was picked up by many other national print and broadcast outlets. This strategy increased her chances of controlling the messages that appeared in the first piece of coverage, which then set the tone for other outlets to follow. Ultimately, working with one media title did not limit media coverage overall.

The media were keen to be put in touch with parent case studies, who could be interviewed about their experiences. Dr Condry had good links with a few organisations that worked with families experiencing APV. The Press Office advised Dr Condry to refer such requests to the relevant support networks rather than approach possible subjects she might know.

Results for the project

The coverage has heightened public awareness of the problem of Adolescent to Parent Violence. The researchers are now developing a programme of knowledge exchange, working with policy makers, and raising the profile of the problem has helped with this work. Accurate coverage is a useful aid when talking to stakeholders about the work that you do. It has more immediate impact than the more densely worded academic papers and reaches a much wider audience. APV is a complex issue: the researchers concluded there was not one reason explaining why it happens. It does not simply occur because of ‘bad parenting’ or a ‘lack of respect amongst today’s young people’. This key message was conveyed in most of the coverage about the research.

Dr Rachel Condry said: ‘There were various challenges that I was somewhat unprepared for. First, the story had leaked out and I was unsure how to deal with a journalist who phoned me out of the blue. The Press Office helped me to manage the flow of information and we were happy with the BBC report that used some of my study, but without jeopardising the publication of the academic paper. The media plan, to give the story to one outlet in the first instance, meant that the coverage was accurate and hit the right tone. It also meant that I could deal with the requests that followed over subsequent days rather than all at once, as a sort of ‘trickle down’ effect. The press release provided an authorised version of the research findings and this was a useful way of dealing with the requests that followed from other media outlets.

I was surprised at how much more control you can have over the flow of information. We took the initiative rather than feeling that I had to respond immediately to every media request that came in - without the time to consider what I really wanted to say. We got a lot of accurate coverage overall, even though we only went to The Guardian initially. The other titles seemed happy enough to pick up the story and do it in their own way, but the main findings of the academic research paper were not distorted in the resulting coverage. I think the wisest decision was to refer the requests for case studies to agencies rather than try to approach people myself. Such agencies know the individual parents so they were better placed to judge who was strong enough to take the strain of doing a media interview. The agencies are also able to provide the support that parents might need after doing such interviews. They can also let listeners, who are suffering in silence, know that there is some help out there. There are professionals who understand the problem – even though services are few and far between. What’s needed, however, are specialised support networks and specific recommendations for professionals trying to help these parents. I hope that the media coverage has gone some way toward helping the process.'

Maria Coyle, the press officer, said: ‘If a story leaks out ahead of publication, it can limit the chances of gaining fuller coverage later on. However, we made sure the journalist had enough to run his story without jeopardising the academic publication.

‘The other important thing was to ensure that the story was retold responsibly. The study came out at a time when the researchers were trying to build relationships with policy makers and the police in order to work together constructively. The academic findings were reported in a neutral way by the media. There was no finger-pointing at any particular parties. This meant that the researchers did not alienate the groups of people they were trying to work with.’