In 2017 a provocative opinion piece was published by our WildCRU in the journal Animals; ‘A Cultural Conscience for Conservation’.  The piece considered the idea of wealthy corporations paying royalties when they use symbolic animals in their logos, branding, or advertising to fund wildlife conservation of those species.

Despite the lion′s evident cultural appeal, its global population has fallen by approximately 43% over the past 21 years (and by 65% in West and Central Africa).

Around the same time this piece was published a popular professional baseball team in Japan, the Saitama Seibu Lions, acting on their ‘cultural conscience’, came up with the ideas of ‘Seibu Lions: Save the Disappearing Wild Lions Project’ that recognise the important role of their mascot and namesake, the Lion, on their teams and fans motivation and success.

With the kind assistance from The University of Oxford’s Japan Office the team connected with WildCRU’s Trans-Kalahari Predator Programme and formed an exciting partnership in early 2019 in which they committed to support lion conservation. 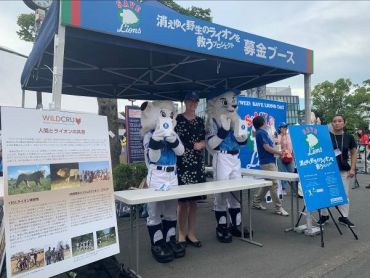 The Trans-Kalahari Predator Programme is one of WildCRU’s larger research projects based in Zimbabwe and Botswana and combines field research on lion ecology and movement behaviour to inform conservation planning and policy, along with community projects to mitigate human-lion conflict and promote co-existence.

How might the lion′s symbol, so familiar as a marketing instrument, metamorphose once again, this time into much needed conservation revenue.

Amongst various fundraising activities once a year the team host a Save Lions Day at the team’s home – the MetLife Dome in Tokorozawa, Saitama Prefecture. Despite the COVID-19 challenges faced last year the event went ahead, and again, still committed to our partnership, the Saitama Seibu Lions will be hosting another day tomorrow, on the 23rd September.

This initiative taken by the Saitama Seibu Lions is inspirational and there is an opportunity here for others to follow suit and be part of a great shift that is desperately needed in wildlife conservation funding.

In the original WildCRU opinion piece, the authors highlighted the use of lions being used symbolically before considering some potentially very lucrative examples.

‘The lion is the most frequently invoked national animal, adopted by 15 countries worldwide from Singapore to Sri Lanka, Libya to Luxemburg. Today, the lion is extant in only two of these nations, Ethiopia and Kenya. But that has not deterred its symbolic, cultural proliferation.

‘Conservation is in crisis, and large sums are needed to fund it. Finding that money necessitates innovative financial mechanisms, and payments triggered by a cultural conscience could be a potent one.’ Professor David Macdonald, WildCRU’s Founder & Director

The British lion, introduced in the 13th century by King Richard “the Lionheart”, arrived millennia after lions themselves strolled through Pleistocene England. Richard I′s Plantagenet lions remain to this day.

Over the centuries, they have been placed on shields to scare the enemy, featured on flags and in crests for identification at sea and abroad, and posted in marble and stone as guardians of public buildings and national treasures. In more recent years, the British lion symbol has migrated onto food as a stamp of quality and as emblems of the country′s national sports teams, from rugby and football to Olympic team GB

But despite the lion′s evident cultural appeal, its global population has fallen by approximately 43% over the past 21 years (and by 65% in West and Central Africa). How might the lion′s symbol, so familiar as a marketing instrument, metamorphose once again, this time into much needed conservation revenue?

Take eggs. According to the British Egg Industry Council, 34 million eggs are consumed in Britain each day. The British Lion Quality Seal is stamped on approximately 85% of these. If each lion stamp were to earn the species one tenth of a penny, then every day it would receive £28,900. That is £10.5 million a year.’

With the Saitama Seibu Lions leading by example in Japan, hopefully others will follow suit.

This is already happening - joining forces with the team at the event tomorrow is Togi Makabe, a Japanese pro-wrestling star. He will be honouring the lion used in the New Japan Pro-Wrestling logo by supporting the team in their fundraising and awareness raising activities.

Finally, for tomorrow’s game and from all at WildCRU: “Ganbare Saitama Seibu Lions!"