2011 was the inaugural year of the Oxford London Lecture. The lecture was made possible by the generous support of the Romanes Fund. 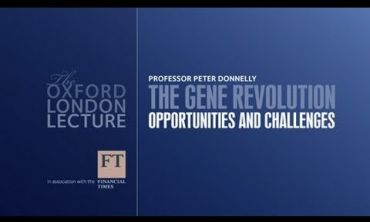 The Gene Revolution – Opportunities and Challenges 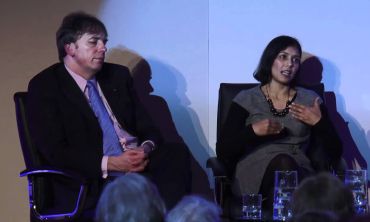 Chaired by Lionel Barber, Editor of the Financial Times

Advances in genomic science: what are the opportunities and challenges for society and the individual?

Synopsis of the 2011 lecture

Professor Peter Donnelly talked about recent advances in genomic science and the opportunities they provide for improved healthcare and disease prevention for common diseases such as heart disease, diabetes and many of the cancers.

He, and a panel of experts, chaired by the Financial Times' editor, Lionel Barber, then considered some of the consequences for society of these developments.  Are healthcare systems well placed to take advantage of these advances? How should information about an individual's DNA sequence be handled?  What access, if any, should relatives, employers or insurance providers have to this kind of information?  And how, as a society, should we consider situations in which individuals are identified as being at higher risk of a particular disease, but choose not to take reasonable personal steps to ameliorate that risk?

Peter's early research focussed on mathematical and statistical problems in genetics, but over time he has become more and more involved in the science itself.  He has played central roles in a number of major collaborations, including the International HapMap project, the successor to the Human Genome Project which studied the patterns of genetic variation in global populations, and the Wellcome Trust Case Control Consortia, which he chairs.  These UK-wide consortia represent some of the largest studies of the genetics of common human diseases ever undertaken, analysing genetic data from over 80,000 people in studying 25 common diseases and conditions.   In 2007, Peter moved within Oxford to take up the Directorship of the Wellcome Trust Centre for Human Genetics, a research centre of around 400 scientists working to understand the genetic basis of common human diseases.  Peter has received a number of academic awards for his work, and is a Fellow of the Royal Society and of the Academy of Medical Sciences.

This event was run in association with the Financial Times. Visit www.ft.com