Chris Green is a Postdoctoral Researcher who specialises in archaeological applications of Geographic Information Systems (GIS). 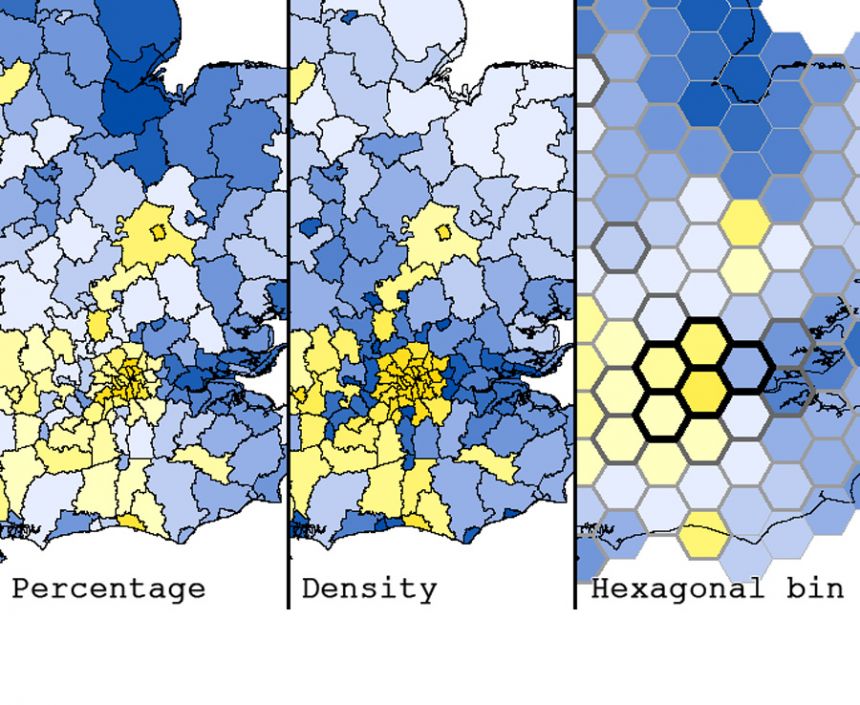 1. Detail comparison of the maps presented below

In the days after the Brexit vote last June, many maps appeared in the media that attempted to show how the people had voted. Some maps, as one would expect, used the geographic shape of the reporting districts to show the results, as in image 2 here, which uses colour shading in what I would characterise as the conventional Brexit colours used by most media outlets to show the percentage by which the “Leave” (blue) or “Remain” (yellow) results won in each district. This image is similar to how the result was presented by some media outlets and its strength lies in the relative ease with which people can find out how the vote went in their own area. 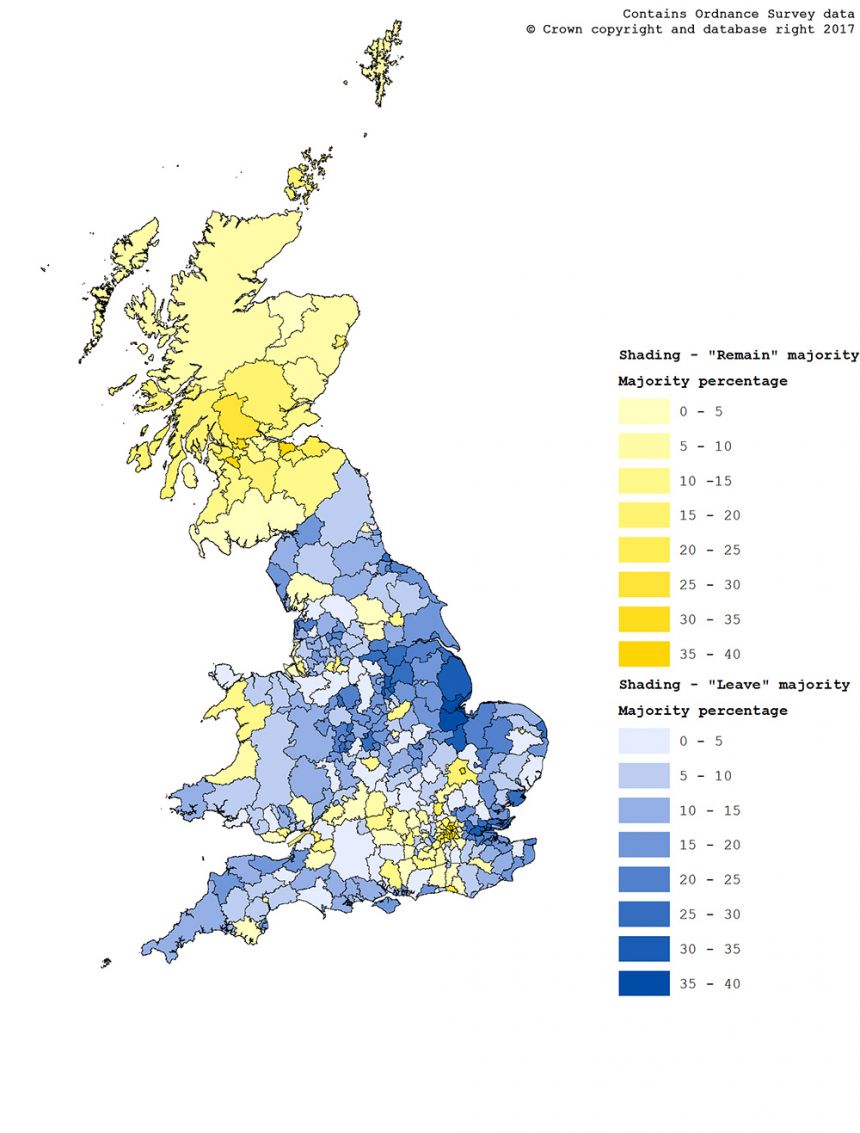 2. Brexit vote result by district; shaded by percentage majority towards “Leave” or “Remain”.

However, as a statistical visualisation it is rather poor as it takes no account of the population density of each district. In fact, as high population districts tend to be small in terms of spatial area, this map actually paints a very misleading picture of how the population of Great Britain voted: this is what we would characterise as a “visual saliency” problem in that the human eye is drawn to larger, more darkly shaded districts even if these are not the most “important” areas of the map. We can, as such, make a very different map which plots each district according to its electorate population density (i.e. the number of eligible voters per square kilometre), as seen in image 3. In this map, although we can no longer see the strength of the “Leave” or “Remain” vote in each district, we can however see which way the vote went in areas of the country with higher or lower population density. 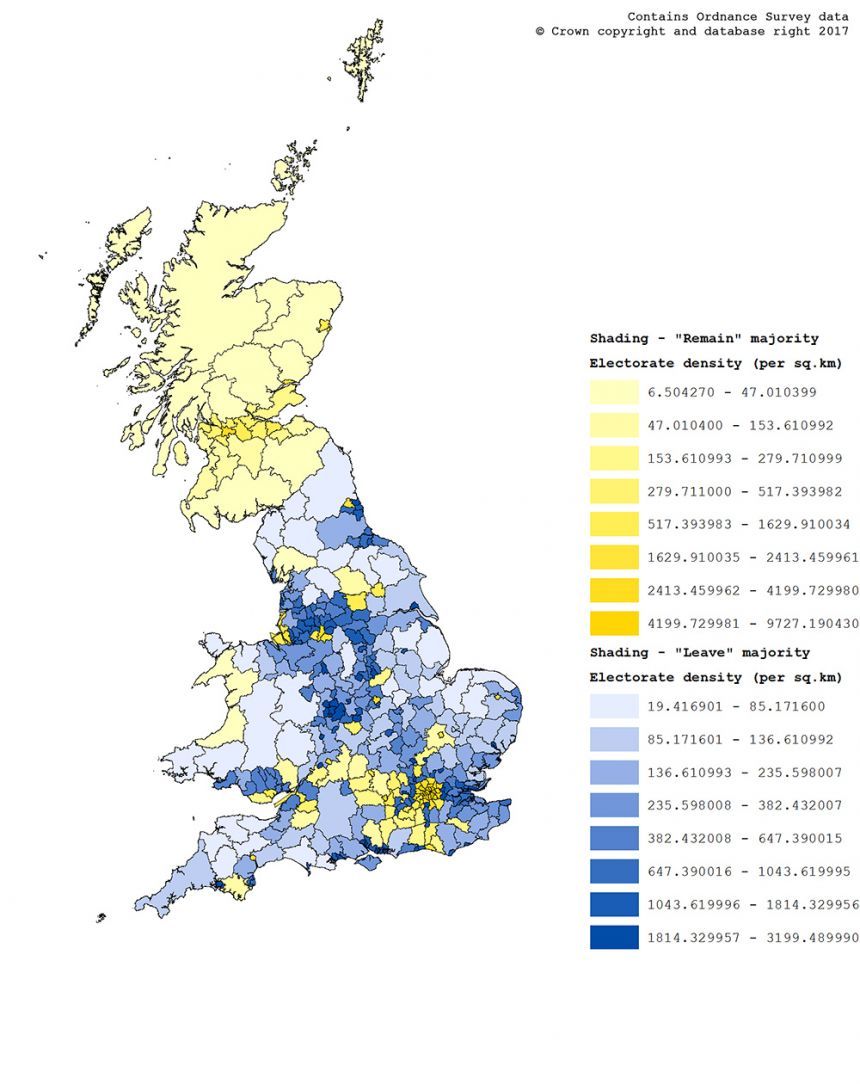 When we compare these two images, some interesting patterns emerge. Most obviously, most of the more densely populated areas of south eastern Britain appear to have voted “Remain” whereas areas of higher population density in northern and central England largely voted “Leave”. However, the area around The Wash in Lincolnshire / Cambridgeshire / Norfolk which stood out very strongly in image 2 as a strong “Leave” zone, is much less obvious in image 3 due to its relatively low population density.

However, I wanted to see if I could make a “better” map of the Brexit referendum vote than images 2 and 3 above or than those I saw in the media shortly after the result was announced. I set myself several criteria:

To do so, I generated a grid of hexagons that covered all of Britain. Regular hexagons are a useful shape, in that (like squares) they tessellate perfectly, but the human eye is less drawn to linear alignments within distributions produced than it would be if squares were used. They also have the benefit of generally being rather visually appealing. The statistical data on the vote was reconfigured from districts into the hexagons on the basis of the percentage overlap between each hexagon and the districts which it overlapped. The result is shown in image 4. 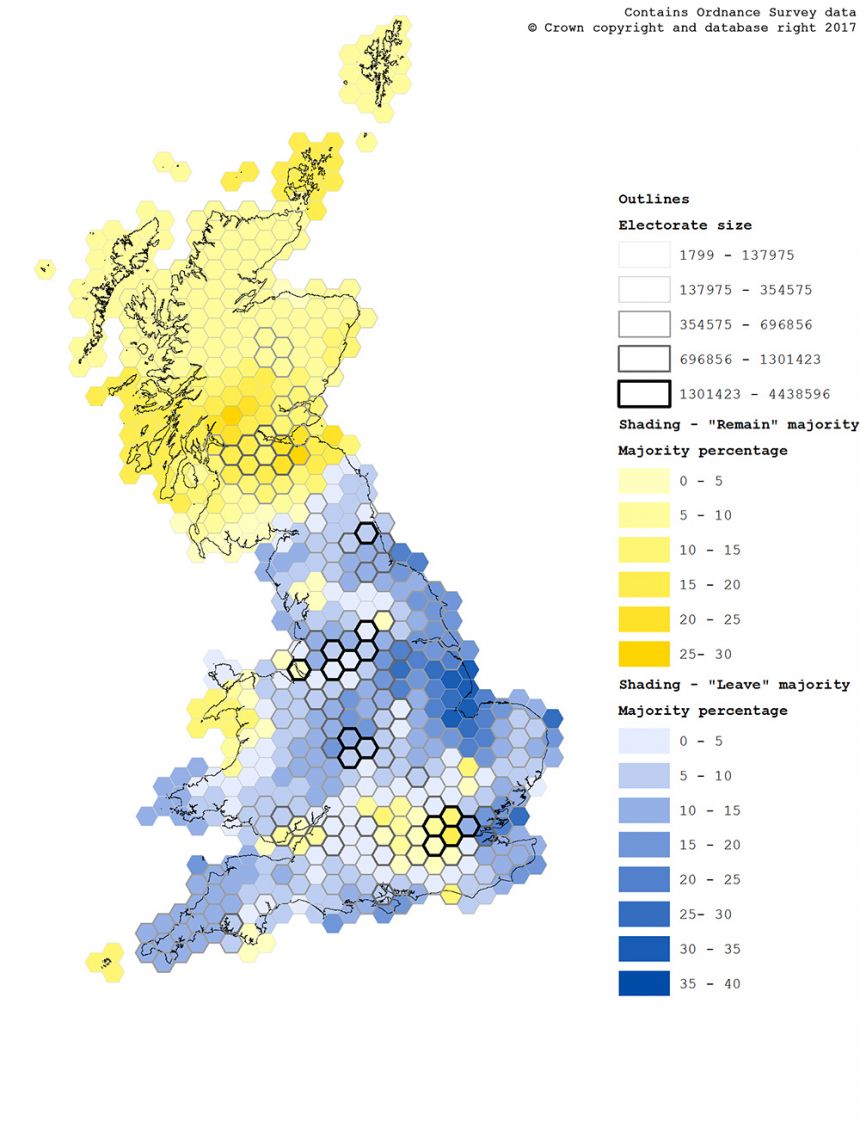 In this final image, the strength of the vote in either direction has been expressed using yellow and blue shading, as previously, but population density has also been shown through the use of thicker and darker outlines for hexagons containing more voters. As the hexagons are all of (approximately, subject to variation caused by map projection) the same spatial area, then we can report this simply as the number of voters rather than the number of voters per square kilometre. Several things are apparent in this map. The areas where the “Leave” vote was strongest are of relatively low population (for Britain). Areas of higher population voted in both directions, but not particularly strongly (with the exception of central London). Other than London, the areas which voted “Remain” particularly strongly are mostly in Scotland and are generally the areas of Scotland of higher population density than their surroundings. However, I cannot see any particularly strong statistical correlations between population density and how people voted: if explanations for the way the referendum played out are to be found, then they are more complex than that, which is not surprising.

The boundary line data used throughout this article was sourced from the Ordnance Survey (OpenData) and the electoral results sourced from the Electoral Commission. The maps here exclude the results from Northern Ireland, as I did not have the time to source and integrate spatial data for that area, for which I apologise.