The Future Is Not What It Used to Be: Climate Change and Energy Scarcity | University of Oxford
Skip to main content

A new book by Dr Jörg Friedrichs, from the Oxford Department of International Development, argues that the future is not what it used to be because we can no longer rely on the comforting assumption that it will resemble the past.

Past abundance of fuel, for example, does not imply unending abundance; infinite growth on a finite planet is not possible. 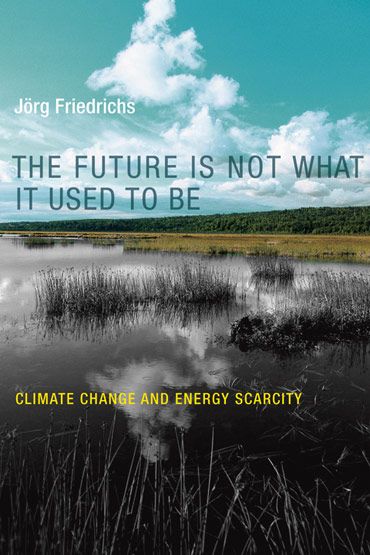 Jörg Friedrichs suggests that industrial society itself is transitory, and he examines the prospects for our civilization's coming to terms with its two most imminent choke points: climate change and energy scarcity. Friedrichs contends that industrial civilization cannot outlast our ability to burn fossil fuels and that the demise of industrial society would entail cataclysmic change, including population decreases. To understand the social and political implications, he examines historical cases of climate stress and energy scarcity: devastating droughts in the ancient Near East; the Little Ice Age in the medieval Far North; the Japanese struggle to prevent 'fuel starvation' from 1918 to 1945; the 'totalitarian retrenchment' of the North Korean governing class after the end of Soviet oil deliveries; and Cuba's socioeconomic adaptation to fuel scarcity in the 1990s. He draws important lessons about the likely effects of climate and energy disruptions on different kinds of societies.

The warnings of climate scientists are met by denial and inaction, while energy experts offer little guidance on the effects of future scarcity, he argues. Friedrichs suggests that to confront our predicament we must affirm our core values and take action to transform our way of life.

Your book says that climate change and energy scarcity are the two key challenges to industrial civilization. What can we realistically expect from the future?

Thanks for inserting the word 'realistically' in the second half of your question. We should not base our expectations for the future on miraculous technological breakthroughs such as nuclear fusion, nor should we base it on equally miraculous breakthroughs in international climate negotiations. We should mobilize all resources at our disposal to make these breakthroughs happen, but we shouldn't gamble too much on them. Instead, we should prepare for the more likely scenario of industrial civilization entering an existential crisis.

What do you propose as the likely timescale for climate and energy disruptions on a large scale?

If climate and energy were completely separate issues, I'd say that climate change will continue to lead to occasional meteorological mayhem over the next couple of decades but may not become a significant stressor at the planetary level for another generation or so. By significant stressor I mean something that has the capacity to systematically disrupt our cherished way of life. Equally, I'd say that we’ll face increasing shortages of liquid fuels over the next couple of decades despite all the hype about shale oil, as is already indicated by high oil prices, but there will be enough coal and gas for at least another generation if we are reckless enough to use it in order to continue industrial business as usual, for example by liquefying coal which is an incredibly carbon-intensive process.

But climate and energy are not separate, as indicated by the example of liquefied coal. If we consider the two problems together, the trouble is likely to start earlier as climate change may take options from the table. For example, we won't be able to solve oil scarcity by liquefying coal lest we fry the planet. By the same token, carbon capture and storage reduces the efficiency of energy generation so may become less acceptable to the degree that fuels become a scarce resource. Climate change can also disrupt renewable energy infrastructure such as hydropower and thus exacerbate the energy issue.

Which societies can best withstand these shortages in your view?

Accepted wisdom has it that poor people in developing countries are most vulnerable, and in the short run this is certainly true. People in rich industrial countries are therefore going to have a greater buffer at the initial stages. We can build dykes where Bangladesh cannot, and we can still afford fuel at prices where Bangladeshis would be crowded out of the market.

Later on, however, the situation may be tragically reversed. Industrial civilization, in all its complexity and including the associated cosmopolitan values of tolerance and cultural diversity, has been a source of strength during conditions of growth as they have prevailed for the last two centuries. In a period of stress, whether due to climate change or any other massive constraint, this may turn into a liability because consumerist society suffers from excessive complexity and a fatal lack of social cohesion. So industrial societies will be advantaged at the onset, but later on may have a harder time adapting to the crisis.

Historical comparisons are instructive here, for example with ancient Mesopotamia where sophisticated civilizations often declined in just a generation or two due to climatic and other environmental stresses. Under the assault of marauding tribes that were better adapted to the new situation, the survivors could effectively disperse into the wilderness. The Mayans after the ninth century are another famous case in point. But today the situation is different. While at the individual and group level migration continues to be a rational response to environmental changes, at the systemic or planetary level habitat tracking is not going to be an adaptive response in a world crowded by eight or nine billion people.

What is the overall message? Is it that governments cannot or will not cooperate at the level needed to bring about coordinated international action to combat climate change?

Governments alone will certainly not be able to do that for their nations. The solution will have to be more radical, and it will have to go deeper than striking this or that international accord. We will have to take serious emergency measures on all fronts to make our civilizational core values and planetary life-support system resilient to the suite of existential challenges lying ahead. Quite obviously, this is a tall order. But it is what it would take.

So what do you propose as the best way to prepare?

As individuals we cannot do much. Reducing our personal carbon footprints is noble but won’t solve the problem because billions of Chinese and Indians have other things to worry about. So we must try and act as global citizens, operating on all levels of governance from local via national to planetary, to help bring about the radical transformations just mentioned. This can only be a gradual process, and it requires a leap of faith. On the one hand, we must brace ourselves for industrial civilization becoming unsustainable. On the other hand, we must take collective action to mitigate the effects or at least manage the descent.

Let's imagine ourselves as part of the crew on a boat that's beginning to flounder. Our understanding of the ship's hulk tells us that this is the beginning of the end. As on the Titanic, most people don’t realize it just yet but the ship is likely to sink. We should then try to lead our fellow crew members in an attempt to stabilize the ship, while also making sure the lifeboats are ready when needed. The last thing we want is people suddenly starting to panic and begin a riot when the ship capsizes. Therefore, it is crucial for us to communicate our assessment of the situation and its gravity in a balanced and responsible way.

In a way, this is precisely what I have been trying to do in my book.