A new book examines same-sex marriage in the United Kingdom and United States in the context of the history of marriage law. This book aims to give readers the facts to inform a public debate that has often been clouded by assumptions and polarised argument. 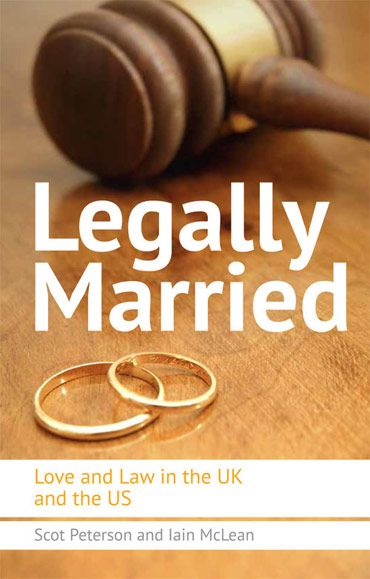 The Scottish and UK governments, and a number of US states, are to legislate to allow same-sex marriage, prompting both celebration and outrage. Some argue against it on religious or cultural grounds, others support it on grounds of equality and human rights, and still others disagree with the institution of marriage altogether.

This summer same-sex marriage became available in four states in the US (California, Delaware, Rhode Island and Minnesota). In October, same-sex couples in New Jersey became the latest to be able to marry, so that 33% of the US population now lives in a jurisdiction that permits same-sex marriage. Next year the number will rise to 38% when same-sex couples can marry in Illinois, and the issue is a live one in other states like Pennsylvania and Ohio. The UK Parliament also voted this summer to permit same-sex couples to marry in England and Wales, with Scotland considering it next.

First, who is this book intended for, the layperson or the lawyer?

How unique is the situation today where governments in the western world have started to approve same sex marriage? This has surely never happened before in history, has it?

What's unique is the rapid pace of the change in attitudes on this subject. According to British Social Attitudes, a survey that has been asking about attitudes toward same-sex relationships since 1983, the number of people who think that sexual relations between people of the same sex is mostly or always wrong dropped in just 20 years from 75% in 1987 to 36% in 2007. Massachusetts, the first state in the US to approve same-sex marriage, did so in 2003; today 16 states permit same-sex marriage, and over 41% of the US population lives in a state that recognises either same-sex marriage or another broad form of legal protection for same-sex couples.

What's not true – and this is another focus of the book – is that marriage has not changed over time. Originally a way of regulating the transfer of property, through inheritance for example, marriage has changed dramatically. During the English civil war, civil marriage was permitted with no church involvement. Then, from 1753 to 1836, the Church of England had a near monopoly. Aside from Quakers and Jews, anyone in England who wished to marry had to do so in a Church of England church, with a Church of England minister presiding. Civil marriage, and marriage in other Protestant and Roman Catholic churches, only became available again in 1836.

The reason for the restrictions on marriage between 1753 and 1836 was to stop marriages between social and economic classes. Similarly, in the United States inter-racial marriage was banned in some states until 1967. And polygamy was legally permitted amongst Mormons in the US in the 19th century. Marriage has changed a great deal over time, and those changes have not been in one direction.

Why have governments got involved at all in determining who can get married? It might be regarded as a matter for the church?

Some members of the Church of England seem to think that this is the case. Indeed, some have argued that church law (of the Church of England) is binding on the state, but of course that's not a credible position in a multi-faith, liberal democracy like the UK. Marriage confers specific legal rights and duties on the two partners and their children. It might be better to ask what the church has to do with this legal relationship, and of course many countries in Europe require a civil marriage ceremony, even when it is followed by a religious one. When that is not the case, as in the US and the UK, the church is acting as an agent of the state when the minister celebrates the marriage. Thus, it seems quite logical that the government sets the rules. At the same time, religious freedom requires that clergy not be required to celebrate same-sex marriages.

What laws provide the 'get-out' for ministers who don't want to perform on the grounds of their own religious views? Do you think these will be invoked very much?

When legislatures, as in some states in the US and in the UK, pass laws to allow same-sex marriage, allowances are made for clergy and others. Legislatures' laws vary depending on how influential religious groups are. Some states like New York have very generous exemptions for religious groups, and even for service providers (florists, bakers and the like) who disapprove of same-sex marriage and don’t want to be involved in these weddings or the relationships that follow from them. In the UK, the government introduced what it called a 'quadruple lock' to protect religious organisations and their clergy. As my co-author Iain has pointed out, the lock only opens from one side. Thus, religious organisations have to approve of same-sex marriage before their clergy can participate in those ceremonies. But even if a religious organisation agrees to perform same-sex marriages, individual clergy can still opt out if they disapprove. And because the Church of England is established, it must follow its normal procedure if it changes its policy on same-sex marriages in the future (currently it does not recognise them). That means going to parliament for a separate law.

The US is often viewed as more traditional as compared with a more secularly-minded UK population. Is it surprising that the issue of same sex marriage has had such traction with US politicians?  What has been the driving force in the US?

Causal, chicken-and-egg questions like this are hard to answer. But it's important to remember that until 2009 no state legislature in the US had approved same-sex marriage. Up to then, states permitted same-sex marriage based on courts’ decisions. Three years later in 2012, voters in two states approved same-sex marriage for the first time in referenda. In the UK, the government held a consultation in 2012, and the bill, which was introduced earlier this year, passed with cross-party support and lopsided majorities in both the House of Commons and the House of Lords. Here, the government waited until the law could be changed without much controversy; in the US, courts first introduced the change, and in many states the question remains highly controversial. Some 29 US states' constitutions define marriage as being between a man and a woman. The bottom line is that if we discount judicial decisions (of a kind not possible in the UK), the progressive parts of the US and the UK seem to be moving at roughly the same pace, which is to be expected.

Is the rest of Europe likely to follow suit on same-sex marriage?

Actually, parts of Europe are way ahead of us. The Netherlands have recognised same-sex marriage since 2001. Currently nine countries in Europe, aside from England and Wales, recognise same-sex marriage. These countries do not fit a particular profile: they range from secularist countries like France to historically Roman Catholic countries like Spain. Just as in the United States, things are changing rapidly, with Finland and Ireland possibly the next countries to introduce same-sex marriage and the Scottish Parliament at Holyrood about to introduce such a law. (Marriage is a devolved matter, so the decision in Westminster earlier this year only applied to England and Wales.) But the 'federal' character of Europe runs parallel to the US: nine nations have constitutional provisions defining marriage as between one man and one woman; Croatia will be holding a referendum on whether to introduce such a constitutional ban on same-sex marriage on 1 December.

In reality, how many same sex marriages are there likely to be in England and Wales now that the laws have changed?

Of 14 million one-family households in England and Wales in the 2011 census, only 32,000 (0.2%) included a couple in a civil partnership. This compares to 7.7 million (53%) where the couple were married. So we're not likely to see a huge surge in the number of marriages now that same-sex couples can get married. However, to the individual couple involved the numbers matter little. Many couples felt that they were being treated unfairly by not being allowed to marry; they argued that no matter how equal civil partnerships were, they were still separate and therefore implicitly inferior. Three religious groups agreed with them at the time the law passed: Liberal Jews, Quakers and Unitarians (and Reform Jews have now joined that group). All three have a long history of insisting that their religious freedom demands that they be allowed to marry couples as they see fit. So this change in the law has advanced both the rights of same-sex couples and religious freedom in the UK.

Legally Married: Love and Law in the UK and the US was published by Edinburgh University Press on 26 November.