In her new book Sacred Landscape in Medieval Afghanistan, Dr Arezou Azad of Oxford University's Faculty of Oriental Studies provides the first in-depth study of the sacred sites and landscape of medieval Balkh, a city in the north of modern-day Afghanistan.

Books spoke to Dr Azad about her research. 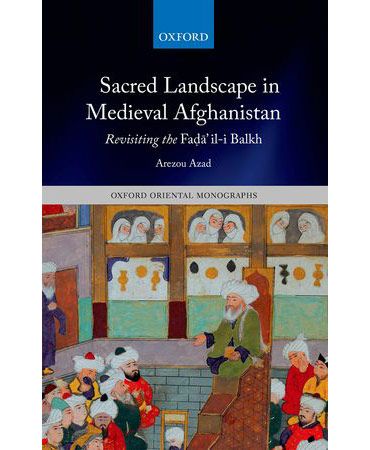 What sparked your interest in the topic?

I'd never have dreamt of becoming a historian-slash-author. Until 10 years ago, my career path had taken a very different course. I was set to help the United Nations in its peacekeeping and development efforts. But on the morning of 19 August 2003 everything changed. I was walking to work on a bright New York morning when I received a call from my sister in London. Had I heard the breaking news that the UN compound in Baghdad had been bombed? I remember thinking that it was surely just a benign attack, like the ones I had witnessed a month earlier when I was in that compound. But I was wrong: 22 UN civilians and contracted staff, and others visiting the compound – internationals and Iraqis, Muslims and non-Muslims, our loved ones, friends, and family members – were killed that day by al-Qa'eda operatives. Many more were wounded.

I never imagined that what started off as a very sad period in my life would eventually spark a sort of intellectual liberation. I was gripped by the hunger for knowledge. I wanted to understand Islam. I wanted to know its origins, how it developed, and how we got here. I wanted to tell people about it, because I felt that we – the concerned public – just didn't know enough. I was particularly interested in the transition from Buddhism to Islam in Central Asia, because I thought it carried a powerful message on a historical process related to Islam that was little understood. Needless to say, I was naïve to think that there were ready answers or 'a' historical truth, but that's part of the process of growing up during your doctorate. I did learn, though, that what came in 622 AD, the year of the Prophet Muhammad's emigration from Mecca to Medina that marks the first year of the Muslim calendar, was not a pre-packaged Islam. Nor were the Islamic conquests immediate or the mere result of brute force by a primitive people. This is a narrative one hears far too often.

What story does the book tell?

The story of Balkh that I tell in this book is a close-up study of the kind of transition I mentioned, but set during the early Islamic centuries in a land that was very special indeed.

Balkh was a large and magnificent city at this time. It was centred in northern Afghanistan but ruled over a major area far beyond modern Afghan borders and stood at a crossroads of trade routes between India, China and the Middle East, making it a melting pot of nationalities, cultures and religions.

This was a land at the eastern fringes of the still young Islamic world that had become known as Balkh the Beautiful, the Dome of Islam, and the Mother of all Cities.

Balkh was a centre for Islamic mysticism and scholarship and was a popular site for Chinese and Indian scholars of Buddhism, and Tibetan saints traced their origins to a 'western kingdom' some suggest was Balkh. It was conquered by Genghis Khan in 1220, and today, European archaeologists are searching for the Greek city built at Balkh by Alexander the Great in 327BC. Balkh is also part of the Iranians' ancient past and is said by some to be the place where Zoroaster, prophet of the Zoroastrian religion, died. Balkh is somewhere that Christians and Jews also flourished, while indigenous gods were worshipped too.

In brief, we are dealing with a real melting pot – a city of magnificent beauty, mercantile prominence at a crossroads along the so-called silk road, and intellectual excellence; an oasis city surrounded by a beautiful but harsh terrain; a London or a New York of its day, when there was no London or New York to speak of.

Surely the fact that early Islamic Balkh was sacred to so many people and religions in such a wide area would tell us something about the course that its transition to Islam took? The story of its transition from a foremost centre of Buddhist worship and teaching to one of Islam was one worth telling, I thought. This became the subject of my research and forms the crux of this book.

How did you carry out your research?

In 2009, I travelled to Afghanistan and visited the site of Balkh in the north of the country. With the help of Philippe Marquis of the French Archaeological Delegation in Afghanistan (DAFA), I was able to rent two cars driven by two excellent Afghan drivers who took us on the 10-hour journey to Mazar-i Sharif, the modern-day capital of Balkh province. We set off for the old site the next morning. The site is dominated by the impressive walls of the old city and is dotted with what appears like the archaeological remains of dozens if not hundreds of shrines; perhaps Buddhist stupas and early Islamic pilgrimage sites.

Back in Oxford, I sought the advice of colleagues and ascertained that a local history of Balkh, called the Fada'il-i Balkh, or Merits of Balkh, had been largely overlooked. It was written by a Balkhi in Arabic in the late 12th century AD. The Persian adaptation of this text, which starts with a brief historical overview including a section on the 'sights and sounds' of Balkh, is the earliest surviving local history and forms the basis for my study.

What were the main findings of your research?

It became apparent that the author of this text took great pains to record where the city’s saints were buried. I soon found that their shrines were co-located across five sites in Balkh. These sites were situated at strategic points of the city – on elevated mounds and at city gates. The author emphasised their sacredness by citing hadith– accounts attributed to the Prophet and his Companions on them – relating to their protective and spiritual qualities.

Finally, I understood that that these sites were not only where the 70 Muslim scholars and mystics were buried, but they were also where sacred men before the arrival of Islam had been put to rest. People like the biblical Job (Ayyub) and Abel (Habil) were alleged to be buried here, as was the mythical Iranian king Gushtasp. I also gathered from Chinese sources that Balkh's Buddhist saints (arhats) were buried here. Thus, the very sites that were holy before the arrival of Islam continued to function as sacred sites for Muslims. The sacredness was adopted, not newly invented. Buddhist codes and practices, for example, were no longer discernable, but the iconic value and symbolic power of the place continued, now under the guise of Islam.

I then triangulated these accounts with the archaeological evidence. What emerged was a possible constellation of sacred sites along the cardinal points of the compass, and at elevated places within. This reminded me of the Buddhist mandala landscape that is represented in Buddhist temple architecture and paintings.

And so, not only were Balkh's sacred sites adopted by the Muslim conquerors, but by default, its entire sacred landscape. This process took centuries to develop; it didn't happen overnight. But the story is powerful – it's about adoption and adaptation of holiness: the continuities of the old in a major transition to the new. What this tells us is that Islam was not an aberration or a deal-breaker, if you will, in its early centuries. Rather, it was an inheritor of what was already there, and a continuator of traditions, albeit in a new language and with a new set of codes.

Why is there such continuity in the use and status of these sacred sites?

It's a good question. Early 20th-century scholars, such as F. W. Hasluck, have tried to answer this question with regard to other sacred sites that were appropriated by new religions and were continued. Hasluck looked at more than a hundred sites in Turkey that had changed hands between Christians, Muslims and 'pagans' during late antiquity and medieval Islam. Perhaps there are political reasons for this. What could be more convincing of a new world order than the appropriation of a highly visible and iconic site? The message would be clear: 'We are in charge now, and our god has pacified your demons, and will be the master of this house of worship.'

Beyond cut-and-dried Realpolitik, anthropologists have suggested that perhaps we humans are somehow respectful of sacredness. They refer to the 'numen', or divine presence, of a site. We wouldn't want to eliminate it where it exists, even if it emanates from the wrong religion, so to speak, lest this unleash its wrath upon us. We'd rather pacify and tame it, adopt it, and put its powers to 'correct' use. I'd imagine that both explanations work, and may have been at play here. And if we fast-forward to today, and consider that the current capital of Balkh, Mazar-i Sharif, hosts one of the holiest shrines for Shi'ites in a traditionally Sunni terrain, this too supports the idea that sacredness has no borders.

See also
Legally Married
The Future Is Not What It Used to Be: Climate Change and Energy Scarcity