The Zika crisis was one of the biggest news stories of 2016. Was it linked to the birth defect microcephaly? Would it disrupt the Rio Olympics? How far would the virus travel?

As a world leader in medicine and life sciences, Oxford was at the forefront of efforts to understand the Zika virus. Multidisciplinary research across the Medical Sciences and Mathematical, Physical and Life Sciences Divisions gave new insights into this mosquito-borne virus, which had continued to spread – primarily across the Americas – since its outbreak in Brazil in 2015.

While for most people Zika is a mild infection involving symptoms such as fever and headache, its potential link to microcephaly – an abnormal smallness of the head that may harm a baby’s brain development – was alarming for women and their partners expecting a baby or thinking about pregnancy.

In March this year, shortly after the WHO declared the Zika crisis to be a public health emergency, it was announced that three Oxford teams would begin research projects focused on the virus, backed by UK government funding released to help tackle the disease.

Professor Stephen Kennedy from the Nuffield Department of Obstetrics and Gynaecology leads a multidisciplinary team that aims to create an online platform for scientists and clinicians to share images of foetal and newborn heads – critical for improving understanding of how Zika causes brain damage, and for developing better screening tests.

Professor Kennedy and Professor José Villar also led an international project, published via a series of papers in The Lancet medical journal by the INTERGROWTH-21st Consortium, which produced a set of charts to enable healthcare professionals worldwide to assess the weight, length and head circumference of newborns. The charts, now adopted by WHO, are gestational-age specific and can be applied to all newborns, regardless of race or ethnicity. And, in the context of the Zika virus epidemic, they provide a vital frontline tool to screen for microcephaly.

Meanwhile, Professor Zoltán Molnár from the Department of Physiology, Anatomy and Genetics is carrying out research in mice to explore at the cellular level how Zika might cause microcephaly, adding to science’s understanding of the fundamental processes that could be targeted to prevent the virus causing this serious growth deformity.

And Dr George Warimwe, now of the Centre for Tropical Medicine and Global Health, is studying the transmission of Zika in an area of East Africa, providing vital information on how the disease could spread.

At the same time, researchers in the Department of Zoology provided the first genome analysis of the outbreak, demonstrating that the virus arose in the Americas from a single introduction, estimated to have taken place between May and December 2013, more than 12 months prior to the first detection of Zika in Brazil. Study author Professor Oliver Pybus described how this estimated date of origin coincided with an increase in air passengers to Brazil from other Zika-affected areas, as well as reported outbreaks in the Pacific Islands. The Oxford researchers worked with scientists from around the world on the study, including many from leading institutions in Brazil.

Also in the spring, researchers from the Department of Zoology reported that the southeastern United States, including much of Texas through to Florida, had ideal conditions for the spread of Zika. Lead author Dr Janey Messina said the new maps revealed priority regions where authorities should concentrate their efforts. A few months later, the first locally transmitted cases in the mainland United States were reported in Florida.

For many scientists, the Zika outbreak bore striking similarities to the Ebola crisis. Oxford’s infectious disease specialists applied some of the lessons learned from Ebola to help support medics and other researchers to get ahead of the new pathogen. Two Oxford-based organisations, the Global Health Network (GHN) and the International Severe Acute Respiratory and Emerging Infection Consortium (ISARIC), were instrumental in providing portals that would, among other things, share crucial data on the outbreak and identify research priorities. Professor Trudie Lang, Head of the GHN and a member of ISARIC, explained how the Ebola crisis demonstrated that this gathering and sharing of information could be carried out even more efficiently to give researchers the best chance possible in the fight against Zika.

The Zika crisis is far from over, with an increase in cases recently reported across south-east Asia, bringing the total number of countries affected to well over 70. As the virus spreads, Oxford researchers will continue to lead the way – across a host of disciplines – in finding new ways to understand and tackle the virus.

‘To date, 2,298 cases of microcephaly and/or malformations of the nervous system potentially associated with Zika virus infection have been reported in 28 countries worldwide. The catastrophic impact on the lives of these mothers and infants is difficult to appreciate, as indeed is the anxiety created for hundreds of thousands of pregnant women in the affected regions. Health professionals are struggling to cope with the consequences. The WHO may have declared that there is no longer a Public Health Emergency of International Concern, but the virus will continue to cause damage. Concerted action is needed to address this human tragedy.’
Stephen Kennedy, Professor of Reproductive Medicine and Head, Nuffied Department of Obstetrics & Gynaecology

Scientists identify a new virus in a rhesus monkey in the Zika forest of Uganda. They name it the Zika virus and trace it to the Aedes africanus mosquito.

Human cases are confirmed via blood tests, and the virus spreads through equatorial Africa and Asia. Decades later, researchers identify two distinct lineages of the virus: African and Asian.

The first large outbreak of Zika takes place on an island in Micronesia, affecting 73% of residents. A year later, the first sexually transmitted case of Zika is recorded, involving a US scientist. Further outbreaks occur in other groups of Pacific islands in 2013–14.

Brazilian authorities confirm Zika virus is circulating in the country, having previously reported a suspicious illness affecting thousands of people in north-eastern states. Within months, a number of other countries in the Americas confirm cases. 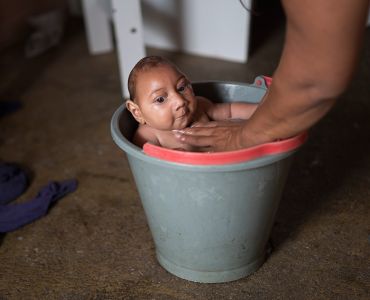 Brazil reports an unusual increase in the number of cases of microcephaly – a rare condition affecting babies’ head size – among newborns. The following month, the country declares a public health emergency amid a further rise in suspected microcephaly cases, as well as an increase in neurological conditions such as Guillain–Barré syndrome and the first deaths associated with Zika infection.

WHO declares that the recent association of Zika infection with clusters of microcephaly and other neurological disorders constitutes a Public Health Emergency of International Concern. Meanwhile, the United States reports a case of sexual transmission of Zika infection in Texas. In April, the first two cases of the Zika virus are reported in Vietnam.

The Olympic Games take place in Rio de Janeiro, with a number of athletes – mainly golfers and tennis players – pulling out over concerns about Zika. The WHO later says there were no confirmed cases of Zika among travellers or athletes.

Based on a review of the evidence, WHO concludes that Zika virus infection during pregnancy is a cause of microcephaly, and that the virus is also a trigger of Guillain-Barré syndrome. A month later, Thailand reports two babies born with Zika-associated microcephaly – the first such cases in south-east Asia.