The Year in Review

A brief overview of some of the highlights of the past year for the University of Oxford. 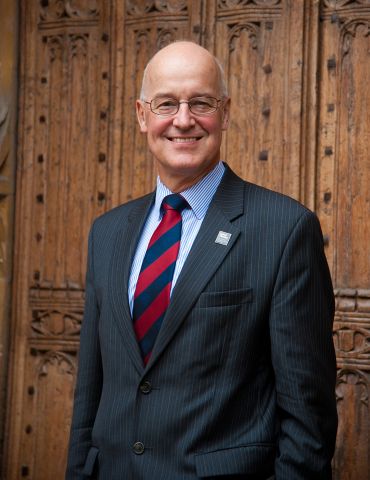 One of the great pleasures and rewards of my 6½ years as Vice-Chancellor has been the opportunity to share and celebrate the difference that Oxford people and Oxford learning and research are making all over the world.

One splendid example was the special contribution of Oxford staff in the testing of candidate vaccines to tackle the Ebola crisis and the vital work that Oxford-led teams did in treating the sick on the ground in West Africa. But, as this Annual Review reminds us, it has been a year rich in wonderful and varied work by Oxford researchers: monitoring penguins in Antarctica, recreating Tutankhamun’s tomb, holding parenting workshops in South Africa, devising new medical technologies and treatments, improving school meals and creating tools such as the Multidimensional Poverty Index to enable governments to shape future policies. Small wonder, then, that the UK government’s 2014 Research Excellence Framework (REF) assessment found that Oxford has the largest volume of world-leading research in the country.

My time as Vice-Chancellor has now run its course. It has coincided with a period of considerable challenge and change for the higher education sector in the UK but I believe that at Oxford we have been equal to the task. Working together, the collegiate University has remained focused on Oxford’s core mission to provide the very finest undergraduate and graduate education and to foster world-leading research. We have been helped enormously in that endeavour by the generous support of alumni and donors worldwide. We were able to report in May that the Oxford Thinking Campaign had reached a total of £2 billion in gifts – achieved through the fastest rate of fundraising in British higher education.

The campaign has also supported inspiring new centres for scholarly endeavour. This Annual Review reports the completion of the Weston Library, an £80 million transformation of what was formerly the New Bodleian into a hub for scholarship and research, conservation and digitisation, and where members of the public can explore the Bodleian's treasures. The Blavatnik School of Government has been created to equip tomorrow's international leaders with the tools to tackle the world’s most challenging and often conflicting issues, and construction work has begun on the Beecroft Building – the first new research facility for physics at Oxford for more than 50 years.

Further afield, the University is engaged in building of a different nature: responding to a request from Aung San Suu Kyi when she visited Oxford in 2012 for help with the redevelopment of Burmese higher education. Since then Oxford students and staff have supported the University of Yangon in numerous ways, from teaching English and sending books to advising on a strategic plan and hosting Burmese visitors in Oxford.

Elsewhere in this Annual Review we celebrate 12 schoolteachers credited by their former students with inspiring them to come to Oxford. We also take a look at Oxford’s thriving Continuing Education programme, which caters to the interests and aspirations of some 14,000 part-time students, many of them entering education as adults for the first time. The University offers in excess of 1,000 part-time courses and programmes; it is perhaps not widely known that the number of students enrolled on them is greater than the number of full-time undergraduates.

There is indeed much to look back on and I do so with the greatest pleasure, confident that Professor Louise Richardson, my successor as Vice-Chancellor, will be leading a forward-looking, dynamic 21st-century powerhouse of education and research.