The Year in Review

Reflecting upon the University's achievements over the past year, and its ambitious plans for the future, I am struck by the many ways in which Oxford contributes to society and the economy – locally, nationally and internationally.

As the largest employer in the county, with an annual turnover in excess of £2 billion, the collegiate University's contribution to the regional economy is significant, and set to grow. The University helped to frame two major economic announcements during the year. Firstly, the City Deal will unleash an estimated £1.2 billion of investment in infrastructure and innovation, including the Oxford Bioescalator and the Begbroke Innovation Accelerator. Secondly, the Oxfordshire Growth Deal sets out an inspiring vision of interconnected knowledge industries running from Bicester to Harwell. £100 million will be invested in transport, homes and more than 5,700 new jobs.

However, perhaps the single most important foundation stone of any regional economy is the quality of its education. Since November 2013, the Oxford Education Deanery has put the University's resources and expertise at the disposal of schools in the city. Led by our Department of Education, the Deanery provides teacher training and seeks to raise the aspirations of secondary school students.

As well as our own students and local schools benefiting from Oxford's expertise and resources, the University's digitisation programme is improving access to our ever expanding museum and library collections – bringing thousands of books, historical artefacts and cultural objects to millions of people worldwide.

On the topic of greater access to Oxford, during July the University hosted its annual UNIQ summer school, attended by 1,000 state school students. Generously funded by the Helsington Foundation for the past five years, this programme has been phenomenally successful, with an undergraduate application success rate more than double that of applicants who have not attended the summer school. The University will continue to fund the programme. Further details on this life-changing scheme can be found within the review. Oxford is educating the leaders of the future, but to fulfil their potential they need to be global citizens. This annual review provides an insight into students' experiences of the benefits of studying and carrying out internships overseas. 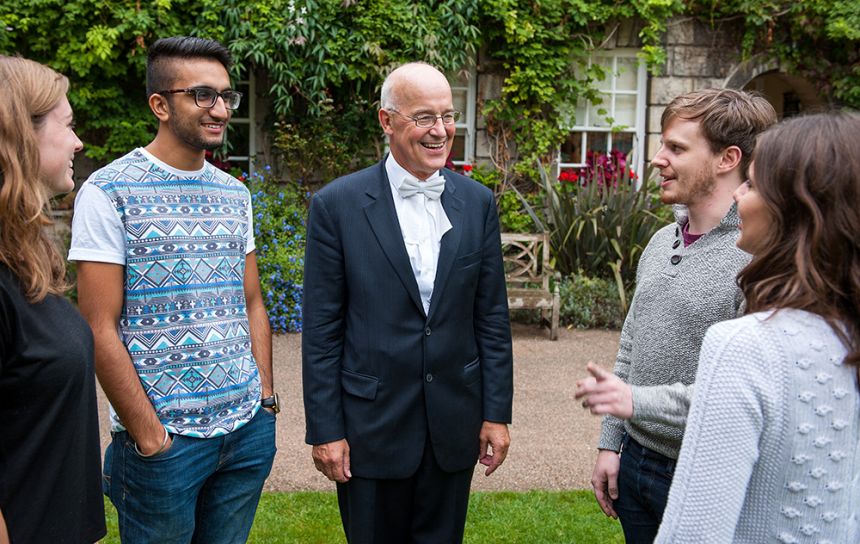 Alongside Oxford Brookes University we have created the Oxfordshire Social Enterprise Partnership to support local enterprises with a social mission, and the University's small community grants scheme is helping support local community activities and projects. Art at Oxford continues to flourish. In this annual review, the new Head of the Ruskin School of Drawing and Fine Art outlines preparations for the launch of a masters' in Fine Art and a move to new premises.

An excellent example of the impact of Oxford's scientific research in improving people's lives is the trial of smart glasses for the registered blind, led by Dr Stephen Hicks of the Nuffield Department of Clinical Neurosciences. The glasses assist with spatial awareness rather than replacing lost vision. Using a video camera mounted on the frame of the glasses, software enables transparent electronic displays in the eyepiece to provide a simple image of nearby obstacles. The aim is to develop a product that will look like an ordinary pair of glasses and cost no more than a few hundred pounds.

The University's medical sciences research has delivered global benefits for many decades. Oxford's researchers are in the front line of the fight against malaria, HIV-AIDS, tuberculosis and many other diseases. Of course, new threats emerge all the time, as the devastating outbreak of the Ebola virus in West Africa has shown.

During the year two global alliances formed to address this growing tragedy, with Oxford in the vanguard of both. Trials of potential new treatments for Ebola, led by Dr Peter Horby of the Centre for Tropical Medicine and Global Health, were fast-tracked in West Africa. Meanwhile the Jenner Institute, under the directorship of Professor Adrian Hill, has been spearheading the effort to find a safe and reliable vaccine to guard against the disease. Oxford's researchers also make an invaluable contribution towards public policy and political discourse. The research of Professor Robert Walker from the Department of Social Policy and Intervention has demonstrated that stigmatising the poor is an ineffective and counterproductive policy. The findings of this international study were recently published in The Shame of Poverty: global perspectives (OUP 2014).

As ever, research can have unexpected but beneficial outcomes. By firing bullets and lasers at spider silk to study how its vibrations carry information about prey, researchers including Professor Fritz Vollrath of the Oxford Silk Group have found that, uniquely, spider silk can be tuned to a wide range of harmonics. The findings could inspire a variety of new engineering technologies, such as tiny, lightweight sensors.

The most significant endorsement of the outstanding quality and importance of Oxford research came, as this review was going to press, in the form of the results of the Research Excellence Framework.

They provide a fitting and eloquent basis on which to express that this annual review, enhanced once again by the inclusion of videos as well as text, provides you with an inspiring insight into Oxford's extraordinary contribution to the global community.

The Ruskin School of Art - visit the Ruskin's website

The shame of poverty - profile of Robert Walker