From Archaeology and Anthropology to Law, Materials Science to Theology and Religion, Oxford tutors and students talking about undergraduate degrees from their perspectives, about what they do best and about what they love.

There is something phenomenal about what happens when Rhodes Scholars get together. Ideas are born, connections are made, things happen. And some of those big things actually change the world.

Throughout 2013 the Oxford University Museum of Natural History has been closed to the public. For a museum which in 2012 welcomed hundreds of thousands of visitors – along with thousands of schoolchildren on educational visits – the decision to close was difficult to make. But it was not without good reason.

‘Ever since the iconic glass roof was installed more than 150 years ago, rainwater has leaked over the main court,’ explains Scott Billings, Communications Coordinator at the museum. ‘Over the past year a major restoration programme has repaired the roof. By the time we open in February 2014 we will no longer need to have buckets at the ready.’ 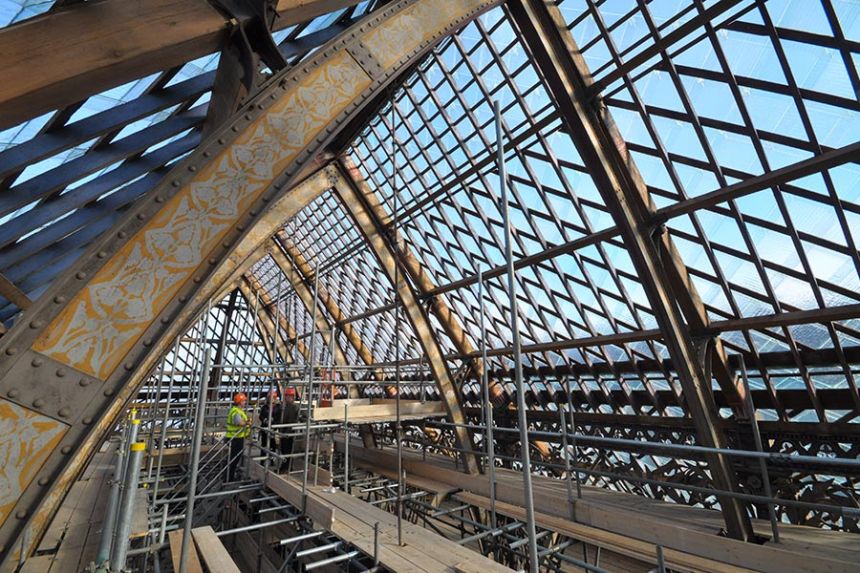 Scaffolding under the glass roof in preparation for the repairs

The scale of the work has been impressive. Each of the 8,565 diamond-shaped panes of glass has been cleaned and then reinstalled in the roof, secured with safety film and compressible gaskets. The beautiful ornate metal work on the roof has also been cleaned.

‘Working on the roof for the first time in 150 years has thrown up some interesting discoveries,’ explains Scott. ‘In particular, we came across some graffiti left high up in the rafters by Victorian roof painters G Thicke and J Randall. This story was picked up by the local media and a direct descendant of one of the painters got in touch with us and came to see their etched names. We have now installed a plaque showing the names of all those who have worked on the latest construction project, alongside the names of their Victorian counterparts.’ 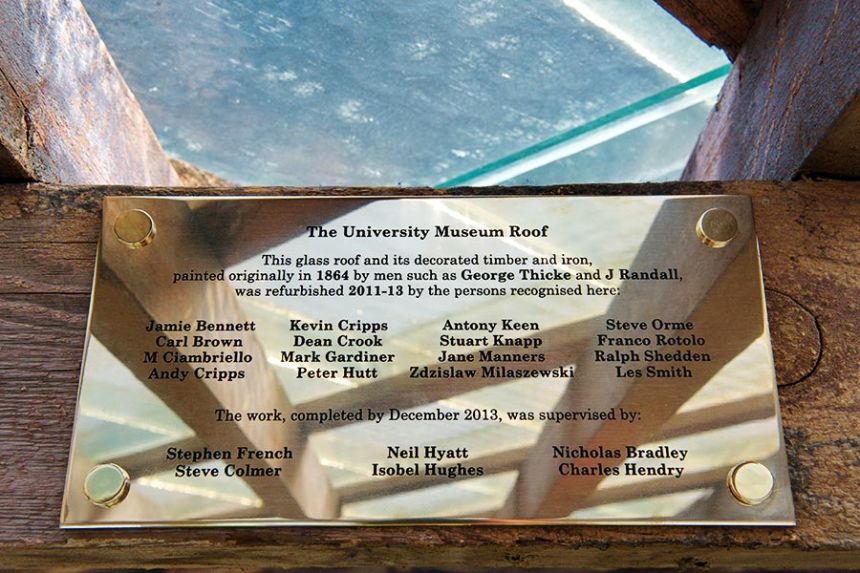 A plaque showing the names of all those who have worked on the latest construction project, alongside the names of their Victorian counterparts

Although the museum building has been closed to the public, work there has certainly not ceased. ‘The closure forced us to think creatively about how we could keep the public engaged with our collections, and we have tried a number of different things over the last year,’ says Scott.

One successful idea was to put exhibits in popular and unexpected places around Oxford town centre. A King Penguin appeared in a fishmonger’s in the Covered Market; a bookworm was placed in the Oxfam Bookshop; and edible insects were displayed in the Turl Street Kitchen restaurant. ‘Known as the “Goes to Town” scheme, this has been really well received and lots of people have entered an online competition to find all the specimens,’ says Scott. ‘In fact, we are now looking at the possibility of having exhibits out and about on a more permanent basis, to reach people who might not normally visit the museum.’

The museum has also continued its educational outreach work by visiting schools in a specially designed van adorned with pictures of exhibits, including a dinosaur. The education team has taken specimens from the museum to small, rural schools that are often unable to visit, delivering a variety of innovative and lively workshops on such topics as skeletons, rocks, minerals and evolution.

Examples of the outreach work while the repairs took place

Efforts have also been made to increase the museum’s online presence, connecting with people who may not live in Oxford or even the UK. A blog, Darkened not Dormant, was created to document the activities of the museum during the time it was closed and has featured items about education programmes, exhibitions, library and archival news, along with other snippets about life at the museum. The scaffolding also provided a rare opportunity to carry out conservation work on the whale skeletons, which are normally suspended from the roof. This important project has been extensively documented at onceinawhale.com. Meanwhile, a Twitter feed, @morethanadodo, gives daily updates to more than 1,600 followers.

The wait for the museum to reopen will have been worth it. Aside from putting an end to the leaks in the roof, the newly cleaned glass will improve the quality of light in the museum. Controllable LED lighting is also being installed, which will allow the museum to be lit in a variety of colours. ‘This will be particularly useful during themed events, when we can turn the court and galleries different colours to create a mood,’ says Scott.

The Museum of Natural History will reopen in February 2014, and there won’t be a bucket in sight.

We’re doing something that we can very reasonably hope will still be improving people’s lives, centuries away.
University Pro-Vice Chancellor for Development and External Affairs, Professor Nick Rawlins

On 26 November Vice-Chancellor Professor Andrew Hamilton launched the Education Deanery, signalling the intention of the University’s Department of Education to work even more closely with schools. The Chief Executive of the National College for Teaching and Leadership, Charlie Taylor, who spoke at the event, welcomed the ‘nationally significant development in school–university relationships’. 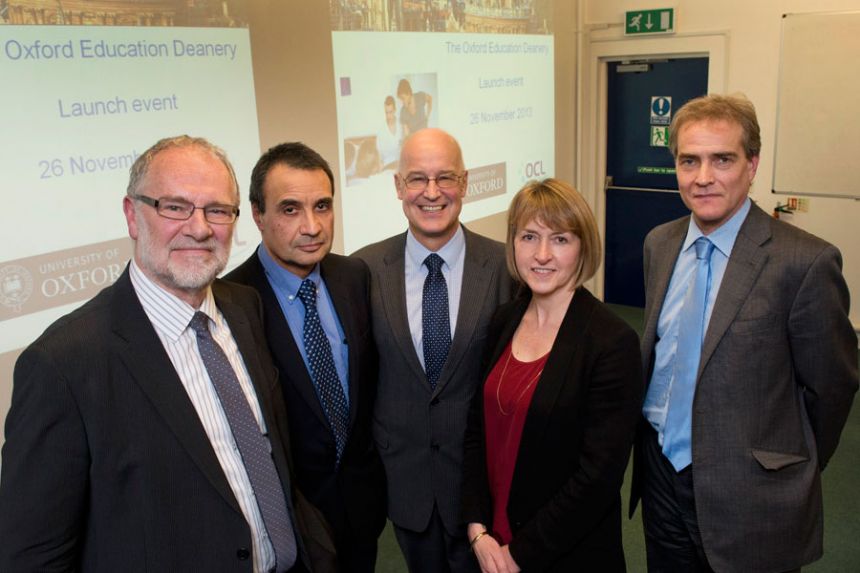 Collaboration with schools is a key part of the department’s success. Close links between Oxford University’s Department of Education and local secondary schools date back 25 years. Ofsted awarded the highest grades in all categories to the Oxford PGCE course for trainee secondary school teachers. The department already has a wealth of research evidence on education – from Early Years provision through to teaching methods and assessment in the classroom, and beyond.

Last January saw the launch of the ‘Leadership for Learning’ programme, which was created by the city’s two universities to develop leadership skills in Oxford’s primary school teachers. Oxford City Council was so concerned about the levels of numeracy and literacy in the city primary schools that it invited educational experts nationally to tender programmes that could improve school leadership skills and raise standards. The education departments of Oxford University and Oxford Brookes University both have highly regarded track records in teacher education and professional development, and teamed up to offer help.

Ian Menter, Professor of Teacher Education at Oxford University, led the winning consortium, including a group of other schools in Oxfordshire which deliver training on behalf of Oxford County Council. Another distinctive feature of the University consortium was the teaming up or ‘twinning’ with a number of schools from the city of Leicester, giving teachers in Oxford the opportunity to be mentored by schools with similar challenges in another part of the country. 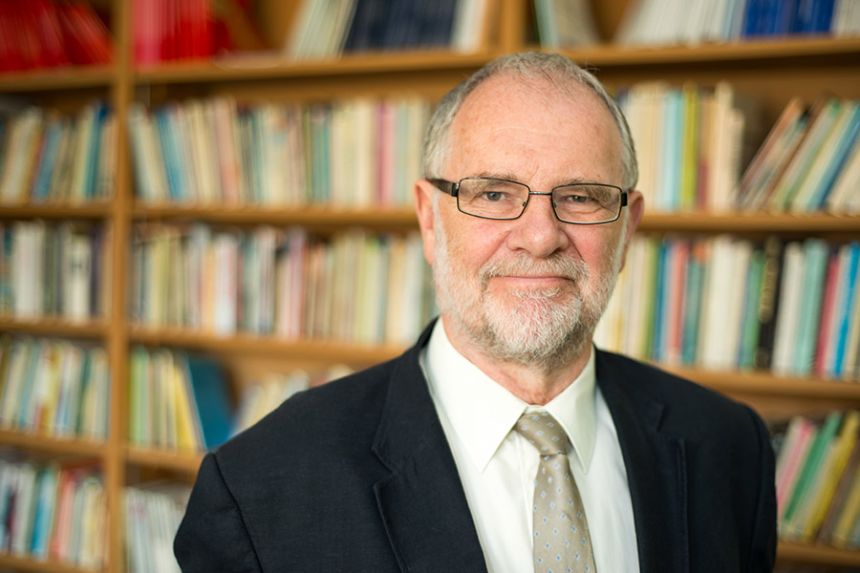 Professor Menter said: ‘School leaders have to deal with expectations about raising standards. They also oversee changes in curriculum and assessments, often needing to incorporate them in their own classroom while at the same time guiding junior colleagues. Add to this the responsibility of school data collection or keeping up staff morale during a period of rapid staff turnover and you see how challenging leadership can be.’

A cohort of 40 teachers and governors participated in the programme’s 12 training days last year, with the teachers being middle and senior leaders from 11 selected primary schools in the city.

Training was spread over the year and included three major one-day conferences where teaching staff and governors listened to international experts explain different leadership models. Participants also had twice-termly ‘Action Learning Set’ meetings where in small groups they discussed shared concerns, and talked about how to develop their skills and work more collaboratively. There were also twice-termly public seminars on the latest research and developments for all members of the participating schools, including parents and governors.

So what has been achieved after all this? Given that Oxford City Council is not an education authority – that responsibility lies with Oxfordshire County Council – this was an innovative step to take. Programme director Professor Menter says the preliminary feedback from the head teachers at participating schools has been encouraging.

‘They have reported that the programme has affected the culture of their schools in a positive way,’ he said. ‘However, it will take time to demonstrate more tangible improvements in literacy and numeracy levels. They don’t change overnight. We must also be cautious about trying to take the credit from the teachers, as future improvements will be down to their hard work at the end of the day.’

The long-term aim of the programme is to build a self-sustaining culture of leadership development in the schools, which will lead to better academic results and improved outcomes for the pupils. 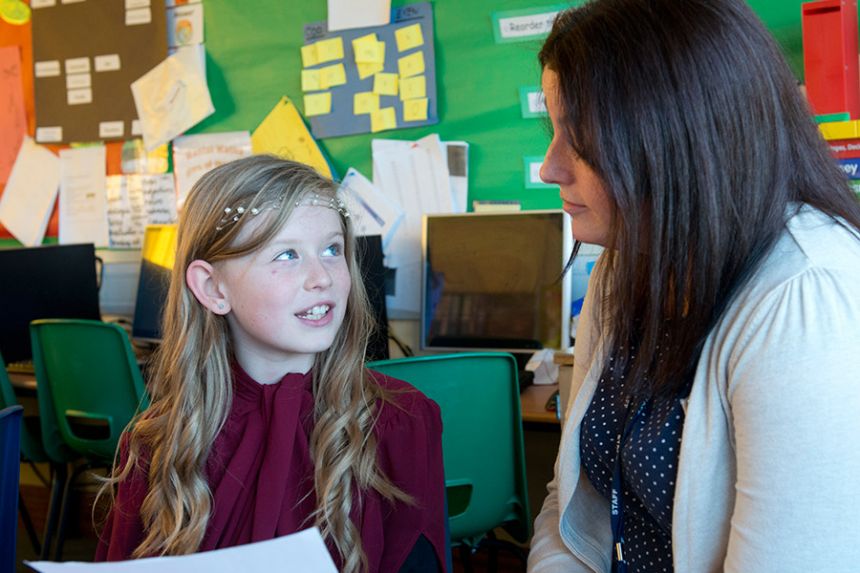 Professor Pamela Sammons, a keynote speaker for the programme, recently published a series of research reviews into school leadership and effective teaching methods. As part of the training, she explained current models of successful schools and examined the role of leadership values, practices and emotions. 'There are many different models of leadership. However, the most effective leadership skills often lie in improving the school environment so pupils can achieve their potential; good school leadership is largely about supporting and enhancing the conditions for teaching,’ she said.

Progress will be measured through interviews with school heads and feedback from the individual sessions offered, but over the longer term, Ofsted inspections and the results of literacy and numeracy tests at the schools will indicate where improvements have been made. A second cohort of staff and governors is due to start the programme at the beginning of 2014. Drawn mainly from the same set of schools as the first cohort, there should be a promising pool of colleagues ready to offer informed views on how to become effective leaders.